Osteoclasts are specialized cells of the hematopoietic lineage that are responsible for bone resorption and play a critical role in musculoskeletal disease. JAK2 is a key mediator of cytokine and growth factor signaling; however, its role in osteoclasts in vivo has yet to be investigated. To elucidate the role of JAK2 in osteoclasts, we generated an osteoclast-specific JAK2–KO (Oc-JAK2–KO) mouse using the Cre/Lox-P system. Oc-JAK2–KO mice demonstrated marked postnatal growth restriction; however, this was not associated with significant changes in bone density, microarchitecture, or strength, indicating that the observed phenotype was not due to alterations in canonical osteoclast function. Interestingly, Oc-JAK2–KO mice had reduced osteoclast-specific expression of IGF1, suggesting a role for osteoclast-derived IGF1 in determination of body size. To directly assess the role of osteoclast-derived IGF1, we generated an osteoclast-specific IGF1–KO mouse, which showed a similar growth-restricted phenotype. Lastly, overexpression of circulating IGF1 by human transgene rescued the growth defects in Oc-JAK2–KO mice, in keeping with a causal role of IGF1 in these models. Together, our data show a potentially novel role for Oc-JAK2 and IGF1 in the determination of body size, which is independent of osteoclast resorptive function. 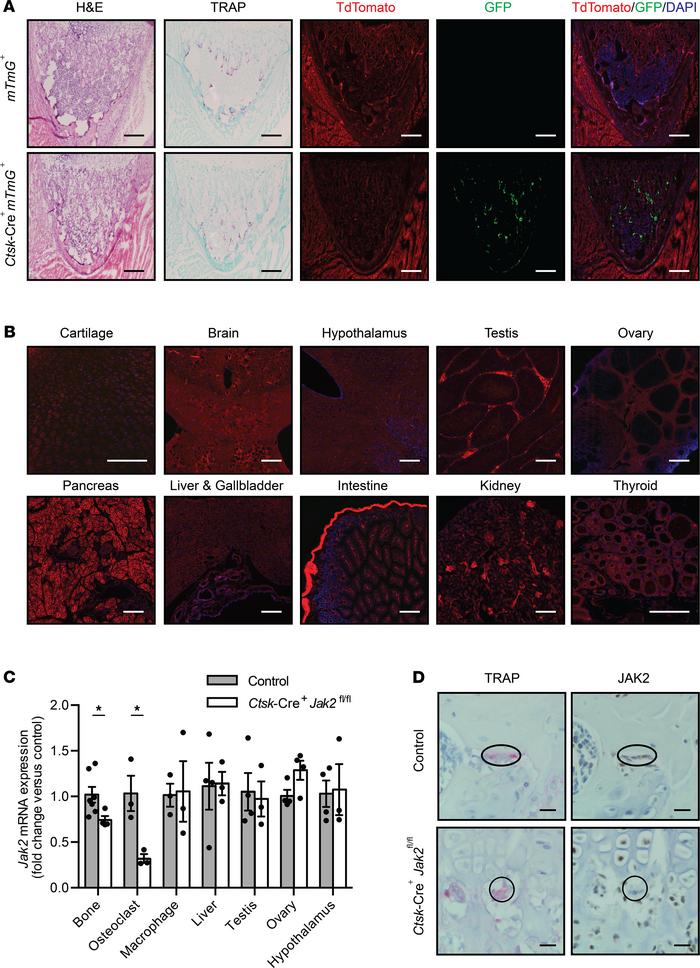