Hex promotes synaptic functions in the hippocampi of 5XFAD mice. 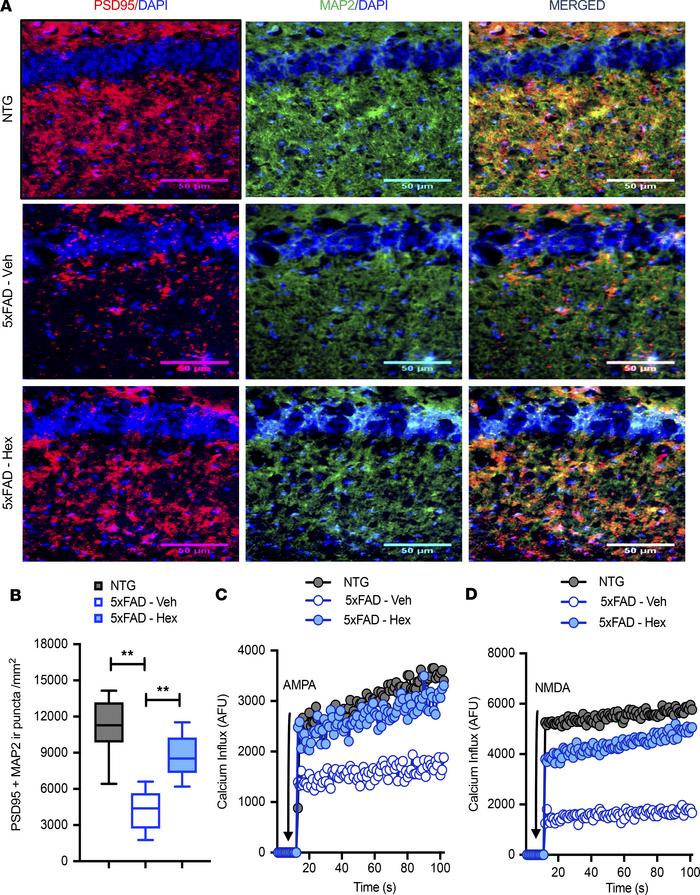 () 5XFAD mice ( = 6/group; 6–7 months old) were treated orally with Hex (5 mg/kg/d) or vehicle (0.1% methyl cellulose) for 1 month. Untreated non-Tg (NTG) mice ( = 6) were used as control. Following 1 month of treatment, PSD95 protein levels were investigated by immunostaining hippocampal tissue harvested from hippocampi of NTG and vehicle fed- and Hex-fed 5XFAD mice with antibodies against neuronal marker MAP2 (green) and PSD95 (red). Scale bars: 50 μm. () Colocalization of PSD95 with MAP2 was analyzed by quantifying PSD95 and MAP2 immunoreactive puncta using ImageJ. For quantification, 2 sections per mice ( = 6/group) were used. Results are shown as mean ± SEM. One-way ANOVA [PSD95 puncta: F(2,33) = 39.712, < 0.001], followed by Bonferroni’s multiple comparisons test, was used to assess significance of the mean; ** < 0.01 vs. vehicle-fed 5XFAD. () AMPA-dependent and () NMDA-dependent calcium currents measured in the hippocampal slices of NTG, vehicle-fed, and Hex-fed 5XFAD mice. The arrow indicates the application of AMPA and NMDA in the assay. To nullify the secondary involvement of AMPA receptor in NMDA-dependent calcium currents, hippocampal slices were treated with NMDA together with NASPM (Ca2+-permeable AMPA antagonist), followed by the recording of calcium influx. Similarly, AMPA-dependent calcium influx was measured in the presence of N20C (noncompetitive NMDA open-channel blocker). Calcium influx was monitored for 300 repeats in a PerkinElmer VICTOR X2 fluorimeter. Results represent the mean of 3 independent experiments.