Muscle progenitor cell fusion is required for the formation and regeneration of multinucleated skeletal muscle fibers. Chronic muscle regeneration in Duchenne muscular dystrophy (DMD) is characterized by ongoing fusion of satellite cell (SC) progeny, but the effects of fusion on disease and the mechanisms by which fusion is accomplished in this setting are not fully understood. Using the mdx mouse model of DMD, we deleted the fusogenic protein Myomaker in SCs or myofibers. Following deletion in SCs, mice displayed a complete lack of myocyte fusion, resulting in severe muscle loss, enhanced fibrosis, and significant functional decline. Reduction of Myomaker in mature myofibers in mdx mice, however, led to minimal alterations in fusion dynamics. Unexpectedly, myofiber-specific deletion of Myomaker resulted in improvement of disease phenotype, with enhanced function and decreased muscle damage. Our data indicate that Myomaker has divergent effects on dystrophic disease severity depending upon its compartment of expression. These findings show that myocyte fusion is absolutely required for effective regeneration in DMD, but persistent Myomaker expression in myofibers due to ongoing fusion may have unintended deleterious consequences for muscle integrity. Thus, sustained activation of a component of the myogenic program in dystrophic myofibers exacerbates disease.

Genetic deletion of Myomaker in SCs of mice leads to complete loss of fusion. 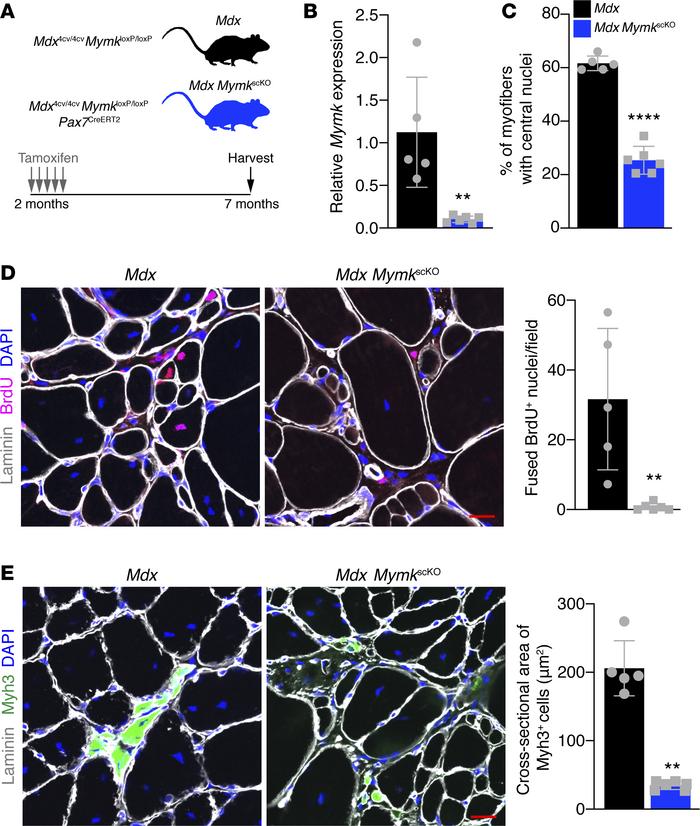