Obesity is a risk factor for gallbladder cancer (GBC) development, and it correlates with shorter overall survival. Leptin, derived from adipocytes, has been suggested to contribute to the growth of cancer cells; however, the detailed mechanism of leptin in GBC drug resistance remains uninvestigated. In this study, our finding that patients with GBC with a higher BMI were associated with increased GBC risks, including shortened survival, is clinically relevant. Moreover, obese NOD/SCID mice exhibited a higher circulating concentration of leptin, which is associated with GBC growth and attenuated gemcitabine efficacy. We further revealed that leptin can inhibit gemcitabine-induced GBC cell death through myeloid cell leukemia 1 (MCL1) activation. The transcription factor C/EBP δ (CEBPD) is responsive to activated STAT3 (pSTAT3) and contributes to MCL1 transcriptional activation upon leptin treatment. In addition, MCL1 mediates leptin-induced mitochondrial fusion and is associated with GBC cell survival. The findings in this study suggest the involvement of the pSTAT3/CEBPD/MCL1 axis in leptin-induced mitochondrial fusion and survival and provide a potentially new therapeutic target to improve the efficacy of gemcitabine in patients with GBC.

CEBPD activates gene transcription in response to leptin and is involved in gallbladder cancer progression. 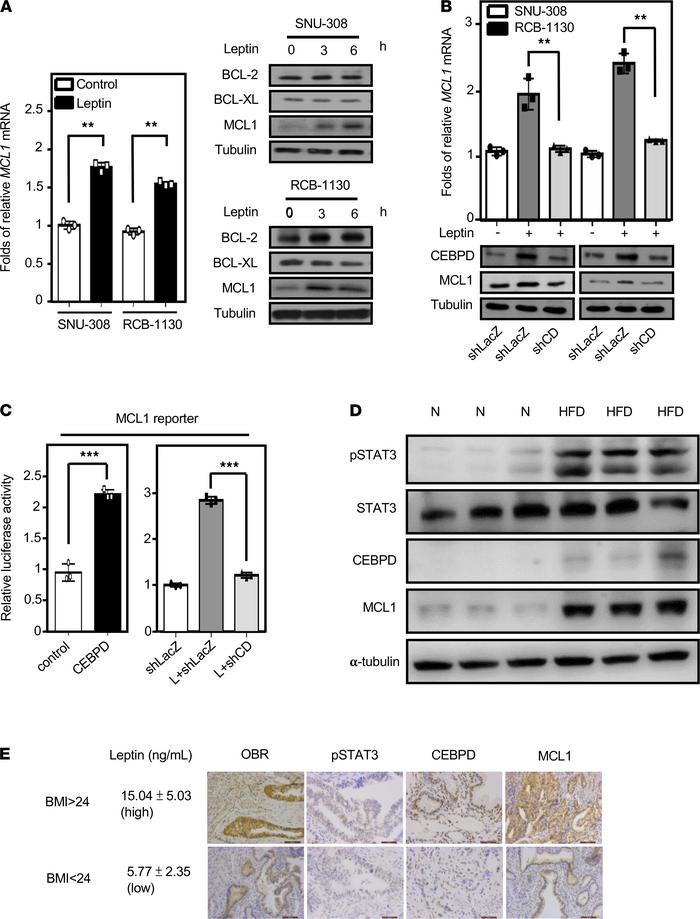