Middle East respiratory syndrome coronavirus (MERS-CoV) emerged in 2012 in Saudi Arabia and has caused over 2400 cases and more than 800 deaths. Epidemiological studies identified diabetes as the primary comorbidity associated with severe or lethal MERS-CoV infection. Understanding how diabetes affects MERS is important because of the global burden of diabetes and pandemic potential of MERS-CoV. We used a model in which mice were made susceptible to MERS-CoV by expressing human DPP4, and type 2 diabetes was induced by administering a high-fat diet. Upon infection with MERS-CoV, diabetic mice had a prolonged phase of severe disease and delayed recovery that was independent of virus titers. Histological analysis revealed that diabetic mice had delayed inflammation, which was then prolonged through 21 days after infection. Diabetic mice had fewer inflammatory monocyte/macrophages and CD4+ T cells, which correlated with lower levels of Ccl2 and Cxcl10 expression. Diabetic mice also had lower levels of Tnfa, Il6, Il12b, and Arg1 expression and higher levels of Il17a expression. These data suggest that the increased disease severity observed in individuals with MERS and comorbid type 2 diabetes is likely due to a dysregulated immune response, which results in more severe and prolonged lung pathology. 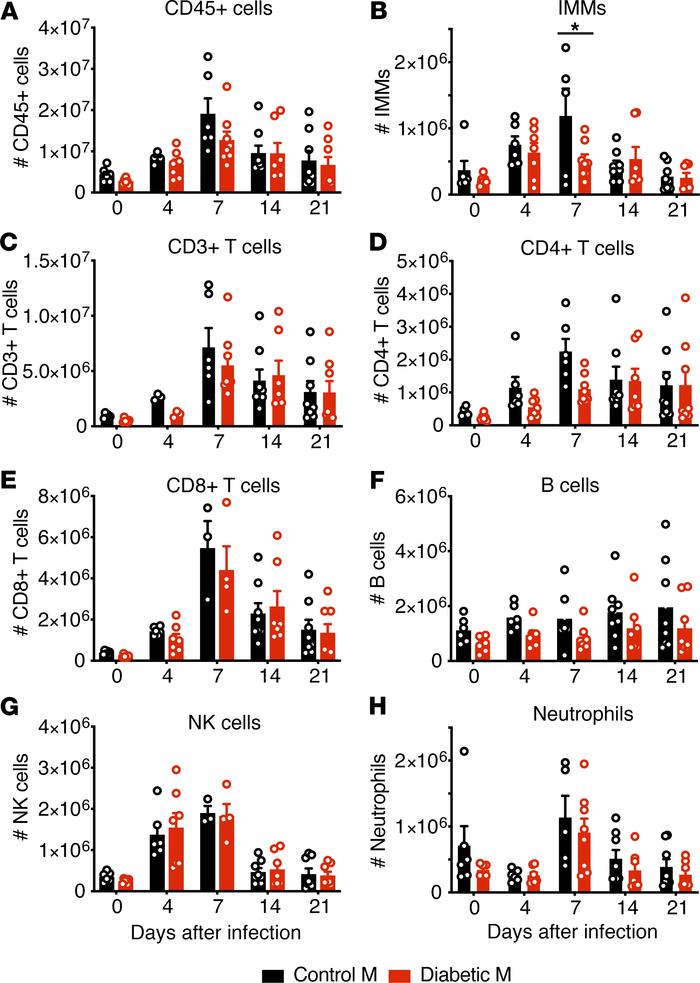 Male diabetic and DPP4H/M mice were infected intranasally with 1.5 × 105 PFU of MERS-CoV Jordan. Lungs were collected at days 4, 7, 14, and 21 after infection or from uninfected mice, and single cells were isolated from the tissue. Flow cytometric analysis was performed on the cells isolated from the lung. The numbers of () CD45+ cells, () inflammatory monocyte/macrophages, () CD3+ T cells, () CD4+ T cells, () CD8+ T cells, () B cells, () NK cells, and () neutrophils were determined. The data are pooled from 2 independent experiments with = 3–9 mice/group. Data are presented as the mean ± SEM. * < 0.05 as determined by 2-way ANOVA with Holm-Šídák posttest.