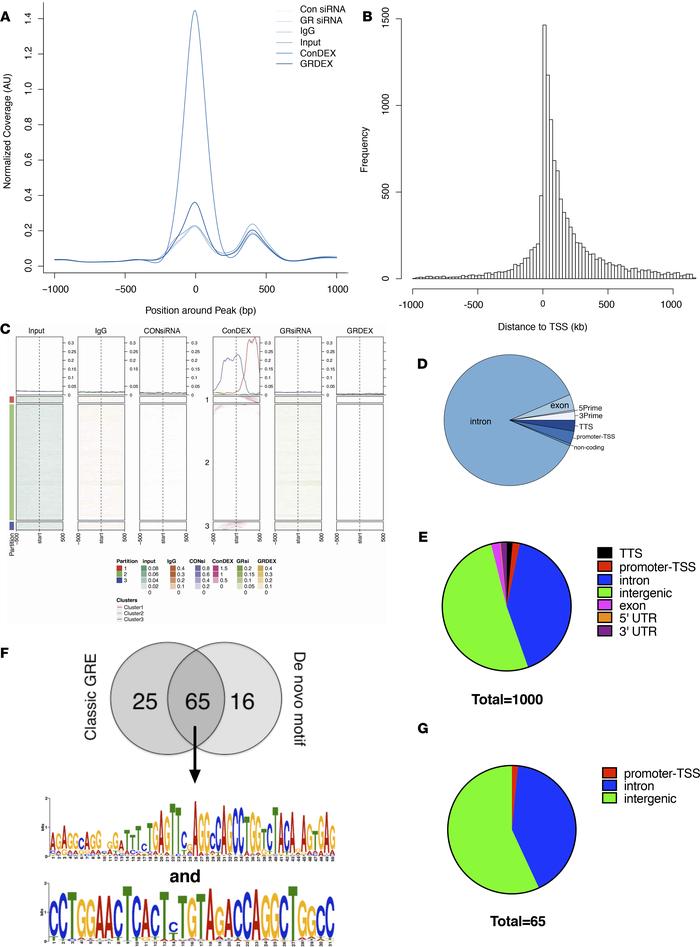 () Six conditions were submitted for ChIP-seq analysis. Control siRNA cells treated with dexamethasone (DEX) (ConDEX) showed the largest peak, reflecting binding of the glucocorticoid receptor (GR) by its ligand. A smaller peak was observed from the GR siRNA cells treated with DEX (GRDEX), as siRNA knockdown is not 100% complete. The other 4 conditions had overlapping peak profiles indicating nonspecific background. Normalized coverage per 1,000,000 reads is plotted as a function of position within 1 kB of the peak. () Histogram of the top 10,000 peaks in comparison with the distance from the transcriptional start site (TSS), indicating enormous enrichment very close to the TSS. () Binding within ± 1 kB of the transcriptional start site in each of the conditions tested. Only the control siRNA + DEX condition showed any appreciable binding, as expected. Two small clusters of genes (clusters 1 and 3) had well-defined binding areas with regard to the TSS. The vast majority (cluster 2) had no discernible pattern. () Pie chart of the top 10,000 peaks indicating the location of binding in the genome. () Characterization of the top 1000 ChIP-seq peak binding sites by location. () Sixty-five of 1000 peaks were found to have both the classic GRE motif (top) and a de novo motif (bottom). () Binding site by location of the 65 peaks with both motifs.