Extracellular matrix and osmolarity influence the development and homeostasis of skeletal tissues through Rho GTPase–mediated alteration of the actin cytoskeleton. This study investigated whether the actin-branching Arp2/3 complex, a downstream effector of the Rho GTPases Cdc42 and Rac1, plays a critical role in maintaining the health of matrix-rich and osmotically loaded intervertebral discs and cartilage. Mice with constitutive intervertebral disc– and cartilage-specific deletion of the critical Arp2/3 subunit Arpc2 (Col2-Cre; Arpc2fl/fl) developed chondrodysplasia and spinal defects. Since these mice did not survive to adulthood, we generated mice with inducible Arpc2 deletion in disc and cartilage (Acan-CreERT2; Arpc2fl/fl). Inactivation of Arp2/3 at skeletal maturity resulted in growth plate closure, loss of proteoglycan content in articular cartilage, and degenerative changes in the intervertebral disc at 1 year of age. Chondrocytes with Arpc2 deletion showed compromised cell spreading on both collagen and fibronectin. Pharmacological inhibition of Cdc42 and Arp2/3 prevented the osmoadaptive transcription factor TonEBP/NFAT5 from recruiting cofactors in response to a hyperosmolarity challenge. Together, these findings suggest that Arp2/3 plays a critical role in cartilaginous tissues through the regulation of cell–extracellular matrix interactions and modulation of TonEBP-mediated osmoadaptation. 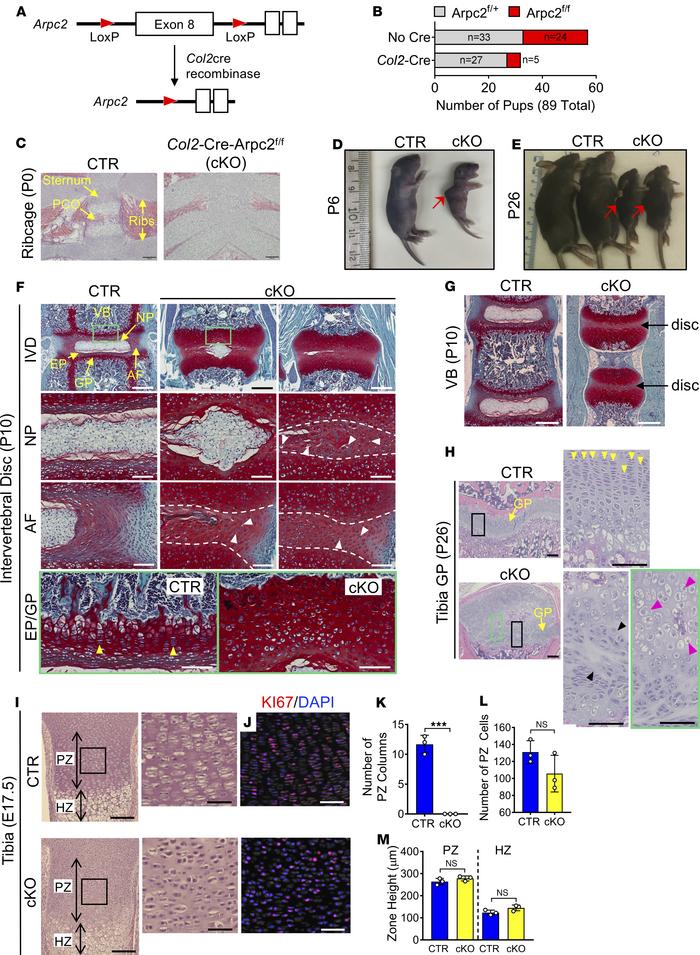