Prion disease is a fatal, incurable neurodegenerative disease of humans and other mammals caused by conversion of cellular prion protein (PrPC) into a self-propagating neurotoxic conformer (prions; PrPSc). Strong genetic proofs of concept support lowering PrP expression as a therapeutic strategy. Antisense oligonucleotides (ASOs) can provide a practical route to lowering 1 target mRNA in the brain, but their development for prion disease has been hindered by 3 unresolved issues from prior work: uncertainty about mechanism of action, unclear potential for efficacy against established prion infection, and poor tolerability of drug delivery by osmotic pumps. Here, we test ASOs delivered by bolus intracerebroventricular injection to intracerebrally prion-infected WT mice. Prophylactic treatments given every 2–3 months extended survival times 61%–98%, and a single injection at 120 days after infection, near the onset of clinical signs, extended survival 55% (87 days). In contrast, a nontargeting control ASO was ineffective. Thus, PrP lowering is the mechanism of action of ASOs effective against prion disease in vivo, and infrequent — or even single — bolus injections of ASOs can slow prion neuropathogenesis and markedly extend survival, even when initiated near clinical signs. These findings should empower development of PrP-lowering therapy for prion disease. 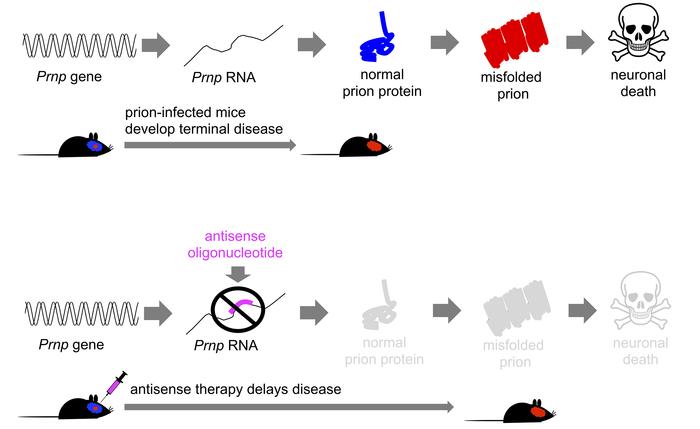