Nipah virus persists in the brains of nonhuman primate survivors

Nipah virus persists in the brains of nonhuman primate survivors

Nipah virus (NiV) is an emerging zoonotic paramyxovirus that causes highly lethal henipavirus encephalitis in humans. Survivors develop various neurologic sequelae, including late-onset and relapsing encephalitis, several months up to several years following initial infection. However, the underlying pathology and disease mechanisms of persistent neurologic complications remain unknown. Here, we demonstrate persistent NiV infection in the brains of grivets that survived experimental exposure to NiV. Encephalitis affected the entire brains, with the majority of NiV detected in the neurons and microglia of the brainstems, cerebral cortices, and cerebella. We identified the vascular endothelium in the brain as an initial target of NiV infection during the acute phase of disease, indicating a primary path of entry for NiV into the brain. Notably, we were unable to detect NiV anywhere else except the brains in the examined survivors. Our findings indicate that late-onset and relapsing encephalitis of NiV in human survivors may be due to viral persistence in the brain and shed light on the pathogenesis of chronic henipavirus encephalitis.

NiV brain persistence is established through infection of the vascular endothelium. 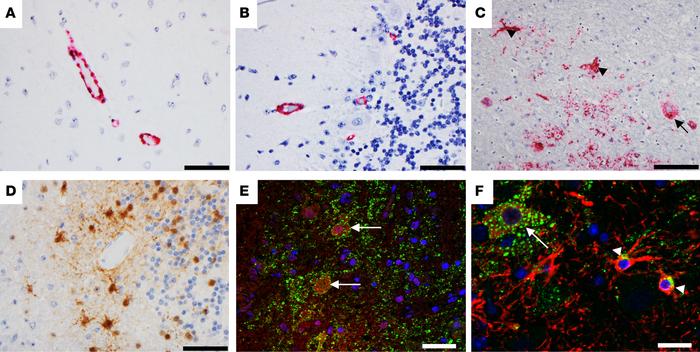