Nonalcoholic fatty liver disease (NAFLD) is a highly prevalent, and potentially morbid, disease that affects one-third of the US population. Normal liver safely accommodates lipid excess during fasting or carbohydrate restriction by increasing their oxidation to acetyl-CoA and ketones, yet lipid excess during NAFLD leads to hyperglycemia and, in some, steatohepatitis. To examine potential mechanisms, we studied flux through pathways of hepatic oxidative metabolism and gluconeogenesis using 5 simultaneous stable isotope tracers in ketotic (24-hour-fasted) individuals with a wide range of hepatic triglyceride content levels (0%–52%). Ketogenesis was progressively impaired as hepatic steatosis and glycemia worsened. Conversely, the alternative pathway for acetyl-CoA metabolism, oxidation in the tricarboxylic acid (TCA) cycle, was upregulated in NAFLD as ketone production diminished and positively correlated with rates of gluconeogenesis and plasma glucose concentrations. Increased respiration and energy generation that occurred in liver when β-oxidation and TCA cycle activity were coupled may explain these findings, inasmuch as calculated hepatic oxygen consumption was higher during fatty liver and highly correlated with gluconeogenesis. These findings demonstrate that increased glucose production and hyperglycemia in NAFLD is a consequence not of acetyl-CoA production per se, but rather of how acetyl-CoA is further metabolized in liver. 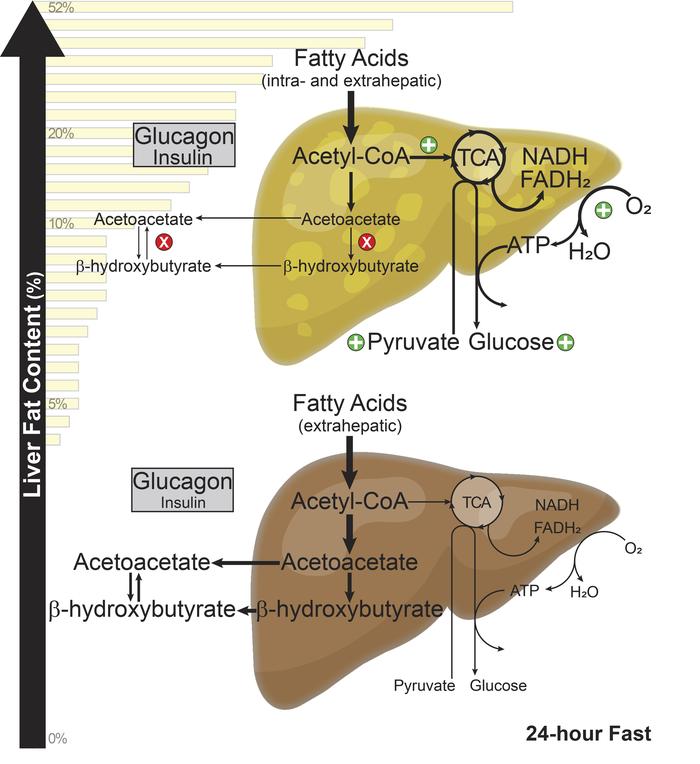