Null mutations of NEUROG3 are associated with delayed-onset diabetes mellitus

Null mutations of NEUROG3 are associated with delayed-onset diabetes mellitus

Biallelic mutations of the gene encoding the transcription factor NEUROG3 are associated with a rare disorder that presents in neonates as generalized malabsorption — due to a complete absence of enteroendocrine cells — followed, in early childhood or beyond, by insulin-dependent diabetes mellitus (IDDM). The commonly delayed onset of IDDM suggests a differential requirement for NEUROG3 in endocrine cell generation in the human pancreas versus the intestine. However, previously identified human mutations were hypomorphic and, hence, may have had residual function in pancreas. We report 2 patients with biallelic functionally null variants of the NEUROG3 gene who nonetheless did not present with IDDM during infancy but instead developed permanent IDDM during middle childhood ages. The variants showed no evidence of function in traditional promoter-based assays of NEUROG3 function and also failed to exhibit function in a variety of potentially novel in vitro and in vivo molecular assays designed to discern residual NEUROG3 function. These findings imply that, unlike in mice, pancreatic endocrine cell generation in humans is not entirely dependent on NEUROG3 expression and, hence, suggest the presence of unidentified redundant in vivo pathways in human pancreas capable of yielding β cell mass sufficient to maintain euglycemia until early childhood. 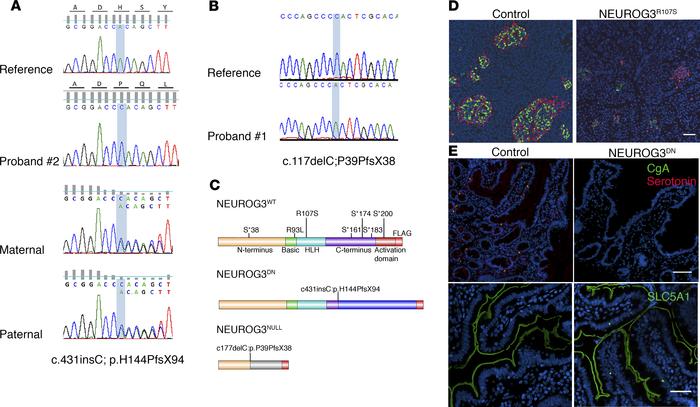 () Diagram comparing the Sanger sequence of reference and proband 1, demonstrating a biallelic deletion of a cytosine at position c.117, resulting in the c.117delC or p.P39PfsX38 variant. () Sanger sequencing results for proband 2 and her 2 parents, demonstrating a homozygous insertion of a cytosine at position 431, resulting in a frame shift mutation, resulting in the c.431insC or p.H144PfsX94 variant. () Schematic diagram of NEUROG3WT showing the location of its basic (green), HLH (aqua blue), and AD domains (deep red). The C-terminal FLAG domain (red) serves as a NEUROG3 marker in our experiments. The structure of the NEUROG3DN variant shows the frame shift induced deletion of the AD domain and its replacement with aberrant segment (blue). Diagram of NEUROG3NULL showing location of the variant and an aberrant segment (gray). () Pancreatic autopsy sample from the age-matched control and the original proband (p.R107S) stained with anti-glucagon (red) and anti-insulin (green) antibodies. Scale bar: 100 μm. () Intestinal biopsy from control and NEUROG3DN samples stained with anti-Chga (green), serotonin (red), and the Na+ glucose/galactose cotransporter (SLC5A1). Scale bar: 100 μm.