Colitis, an inflammatory bowel disease, is caused by a variety of factors, but luminal microbiota are thought to play crucial roles in disease development and progression. Indole is produced by gut microbiota and is believed to protect the colon from inflammatory damage. In the current study, we investigated whether indole-3-carbinol (I3C), a naturally occurring plant product found in numerous cruciferous vegetables, can prevent colitis-associated microbial dysbiosis and attempted to identify the mechanisms. Treatment with I3C led to repressed colonic inflammation and prevention of microbial dysbiosis caused by colitis, increasing a subset of gram-positive bacteria known to produce butyrate. I3C was shown to increase production of butyrate, and when mice with colitis were treated with butyrate, there was reduced colonic inflammation accompanied by suppression of Th17 and induction of Tregs, protection of the mucus layer, and upregulation in Pparg expression. Additionally, IL-22 was increased only after I3C but not butyrate administration, and neutralization of IL-22 prevented the beneficial effects of I3C against colitis, as well as blocked I3C-mediated dysbiosis and butyrate induction. This study suggests that I3C attenuates colitis primarily through induction of IL-22, which leads to modulation of gut microbiota that promote antiinflammatory butyrate. 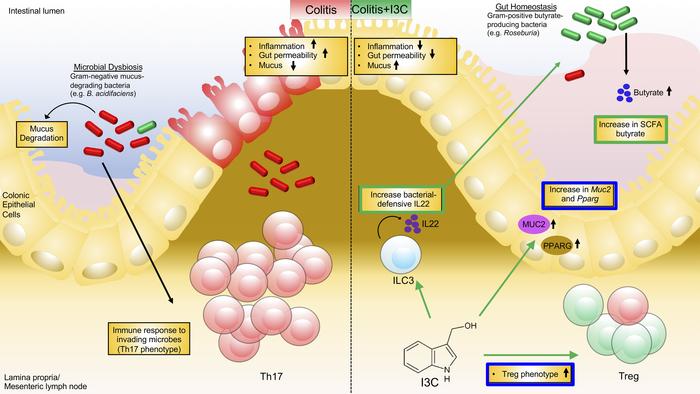