cMSCs cultured as a monolayer enhance platelet formation in vitro. 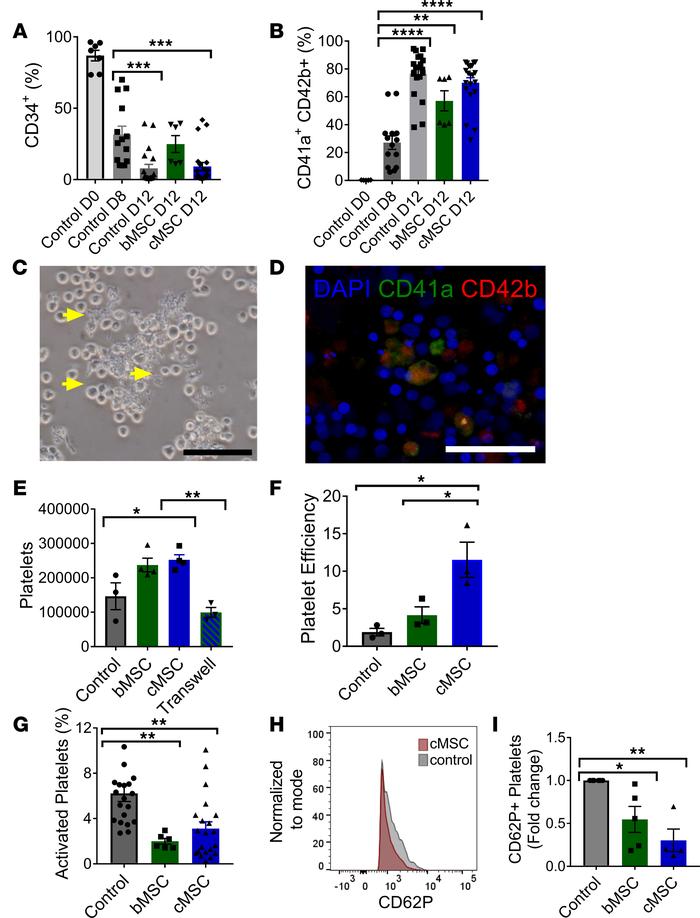 CD34+ cells were differentiated for 8 days into megakaryocytes and then cultured with cMSCs, with bMSCs, or alone. () Expression of CD34 decreased by day 8 of culture, demonstrating differentiation from the stem cell state. () In all 3 groups, the presence of CD41a+ and CD42b+ cells, representative of mature megakaryocytes, could be detected by flow cytometry. () By day 12 of in vitro culture, proplatelet formation could be detected in the cMSC coculture group. Scale bar: 50 μm. Yellow arrows indicate proplatelets. () Immunofluorescent staining of the cMSC coculture group at day 12 of culture revealed the presence of CD41a+CD42b+ megakaryocytes. Scale bar: 50 μm. () By flow cytometry, the number of platelets formed was quantified per culture well. Significantly fewer platelets were formed when cMSCs were separated by a transwell, suggesting that contact is required between megakaryocytes and cMSCs. () The platelet efficiency, or platelets formed per megakaryocyte, was significantly higher in the cMSC group compared with the control group. () The amount of activated platelets expressing CD62P was quantified by flow cytometry. () Representative histogram of CD62P+ platelet population in cMSC group versus control. () Fold change of CD62P+ platelets relative to the control group ( = 10–15 for all cocultures). * ≤ 0.05; ** ≤ 0.01; *** ≤ 0.001; **** ≤ 0.0001. All quantitative data was analyzed by 1-way ANOVA with Tukey post hoc test.