Predictive model of response to tafamidis in hereditary ATTR polyneuropathy

Predictive model of response to tafamidis in hereditary ATTR polyneuropathy

BACKGROUND The hereditary transthyretin (TTR) amyloidoses are a group of diseases for which several disease-modifying treatments are now available. Long-term effectiveness of these therapies is not yet fully known. Moreover, the existence of alternative therapies has resulted in an urgent need to identify patient characteristics that predict response to each therapy.METHODS We carried out a retrospective cohort study of 210 patients with hereditary TTR amyloidosis treated with the kinetic stabilizer tafamidis (20 mg qd). These patients were followed for a period of 18–66 months, after which they were classified by an expert as responders, partial responders, or nonresponders. Correlations between baseline demographic and clinical characteristics, as well as plasma biomarkers and response to therapy, were investigated.RESULTS 34% of patients exhibited an almost complete arrest of disease progression (classified by an expert as responders); 36% had a partial to complete arrest in progression of some but not all disease components (partial responders); whereas the remaining 30% continued progressing despite therapy (nonresponders). We determined that disease severity, sex, and native TTR concentration at the outset of treatment were the most relevant predictors of response to tafamidis. Plasma tafamidis concentration after 12 months of therapy was also a predictor of response for male patients. Using these variables, we built a model to predict responsiveness to tafamidis.CONCLUSION Our study indicates long-term effectiveness for tafamidis, a kinetic stabilizer approved for the treatment of hereditary TTR amyloidosis. Moreover, we created a predictive model that can be potentially used in the clinical setting to inform patients and clinicians in their therapeutic decisions.

Concentration of tafamidis in plasma and extent of tetramer stabilization are different according to response classification. 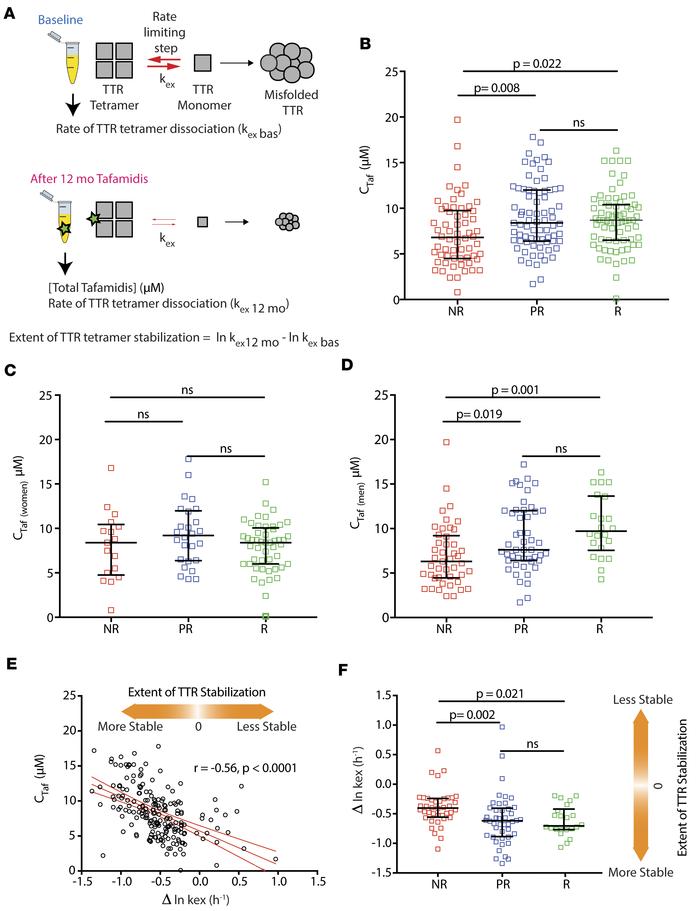 () Diagram representing the TTR amyloidogenesis cascade hypothesis and the experimental approach for this experiment. Using samples collected at baseline (bas) and after 12 months of therapy, the rate of dissociation of the TTR tetramer was determined at baseline and after 12 months of tafamidis therapy; the extent (Δln kex) of TTR tetramer stabilization was calculated as shown in the figure; additionally, total concentration of tafamidis () in plasma was measured in the 12-months samples. () Total in plasma is significantly lower in nonresponders ( = 62) when compared with partial responders ( = 75) and responders ( = 71). () Total in women is not significantly different according to response classification (NR: = 17, PR: = 26, R: = 49). () in men is significantly lower in nonresponders (NR: = 45, PR: = 49, R: = 22). () Correlation between plasma and the extent of TTR stabilization ( = 194), showing that a higher is positively correlated with a more stable TTR tetramer. , Spearman’s correlation coefficient; red line represents best fit ( = 0.26); curved red lines represent 95% confidence intervals of the best fit. () TTR in plasma of male nonresponders (n = 40) is significantly less stable when compared with male partial responders ( = 44) and male responders ( = 22); for – and , horizontal bars represent median and errors bar represent interquartile range. values were calculated using Kruskal-Wallis test with Dunn’s multiple-comparisons correction.