Aberrant accumulation and activation of eosinophils and potentially mast cells (MCs) contribute to the pathogenesis of eosinophilic gastrointestinal diseases (EGIDs), including eosinophilic esophagitis (EoE), gastritis (EG), and gastroenteritis (EGE). Current treatment options, such as diet restriction and corticosteroids, have limited efficacy and are often inappropriate for chronic use. One promising new approach is to deplete eosinophils and inhibit MCs with a monoclonal antibody (mAb) against sialic acid–binding immunoglobulin-like lectin 8 (Siglec-8), an inhibitory receptor selectively expressed on MCs and eosinophils. Here, we characterize MCs and eosinophils from human EG and EoE biopsies using flow cytometry and evaluate the effects of an anti–Siglec-8 mAb using a potentially novel Siglec-8–transgenic mouse model in which EG/EGE was induced by ovalbumin sensitization and intragastric challenge. MCs and eosinophils were significantly increased and activated in human EG and EoE biopsies compared with healthy controls. Similar observations were made in EG/EGE mice. In Siglec-8–transgenic mice, anti–Siglec-8 mAb administration significantly reduced eosinophils and MCs in the stomach, small intestine, and mesenteric lymph nodes and decreased levels of inflammatory mediators. In summary, these findings suggest a role for both MCs and eosinophils in EGID pathogenesis and support the evaluation of anti–Siglec-8 as a therapeutic approach that targets both eosinophils and MCs. 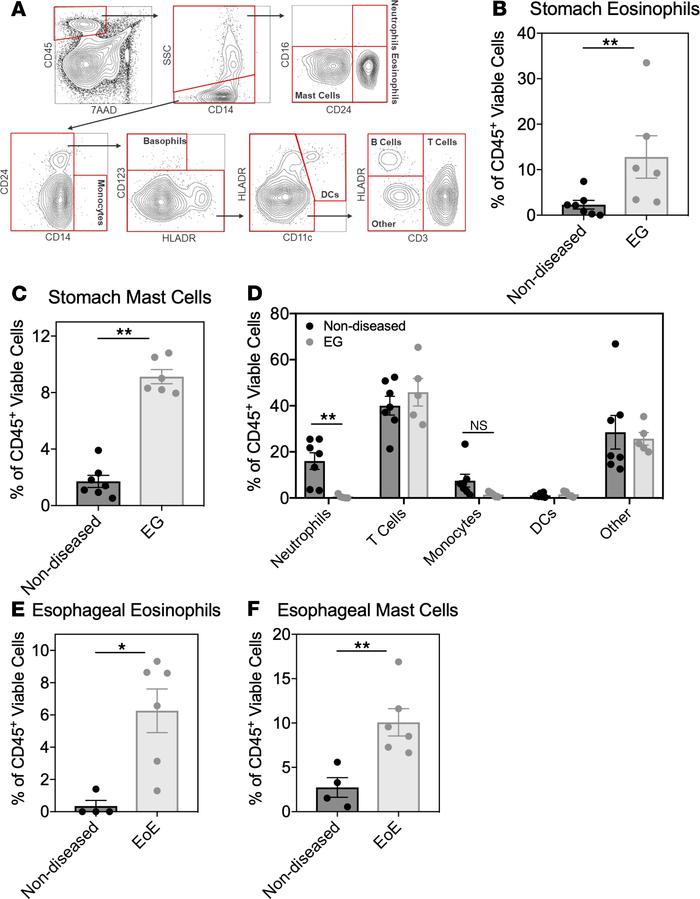