Human endotrophin as a driver of malignant tumor growth

Human endotrophin as a driver of malignant tumor growth

We have previously reported that the carboxy-terminal proteolytic cleavage product of the COL6α3 chain that we refer to as “endotrophin” has potent effects on transformed mammary ductal epithelial cells in rodents. Endotrophin (ETP) is abundantly expressed in adipose tissue. It is a chemoattractant for macrophages, exerts effects on endothelial cells and through epithelial-mesenchymal transition (EMT) enhances progression of tumor cells. In a recombinant form, human endotrophin exerts similar effects on human macrophages and endothelial cells as its rodent counterpart. It enhances EMT in human breast cancer cells and upon overexpression in tumor cells, the cells become chemoresistant. Here, we report the identification of endotrophin from human plasma. It is circulating at higher levels in breast cancer patients. We have developed neutralizing monoclonal antibodies against human endotrophin and provide evidence for the effectiveness of these antibodies to curb tumor growth and enhance chemosensitivity in a nude mouse model carrying human tumor cell lesions. Combined, the data validate endotrophin as a viable target for anti-tumor therapy for human breast cancer and opens the possibility for further use of these new reagents for anti-fibrotic approaches in liver, kidney, bone marrow and adipose tissue. 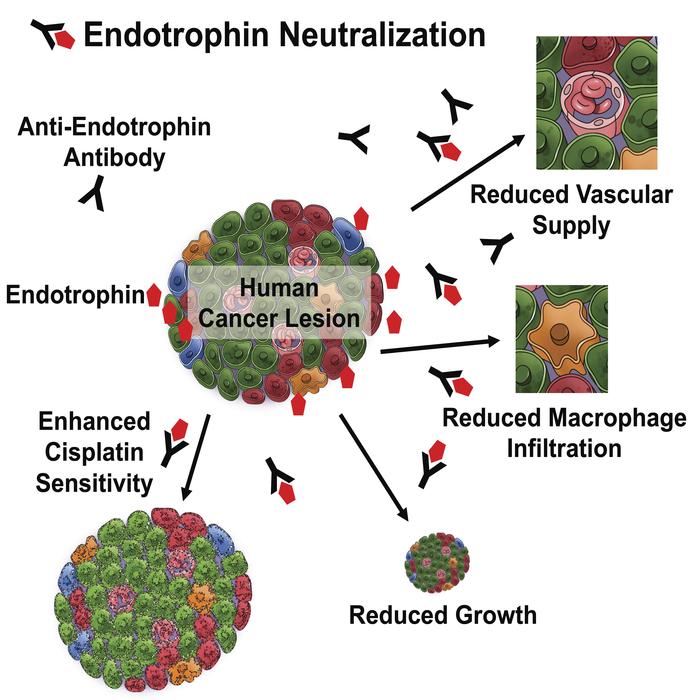