Glycine encephalopathy (GE), or nonketotic hyperglycinemia (NKH), is a rare recessive genetic disease caused by defective glycine cleavage and characterized by increased accumulation of glycine in all tissues. Here, based on new case reports of GLDC loss-of-function mutations in GE patients, we aimed to generate a zebrafish model of severe GE in order to unravel the molecular mechanism of the disease. Using CRISPR/Cas9, we knocked out the gldc gene and showed that gldc–/– fish recapitulate GE on a molecular level and present a motor phenotype reminiscent of severe GE symptoms. The molecular characterization of gldc–/– mutants showed a broad metabolic disturbance affecting amino acids and neurotransmitters other than glycine, with lactic acidosis at stages preceding death. Although a transient imbalance was found in cell proliferation in the brain of gldc–/– zebrafish, the main brain networks were not affected, thus suggesting that GE pathogenicity is mainly due to metabolic defects. We confirmed that the gldc–/– hypotonic phenotype is due to NMDA and glycine receptor overactivation, and demonstrated that gldc–/– larvae depict exacerbated hyperglycinemia at these synapses. Remarkably, we were able to rescue the motor dysfunction of gldc–/– larvae by counterbalancing pharmacologically or genetically the level of glycine at the synapse. 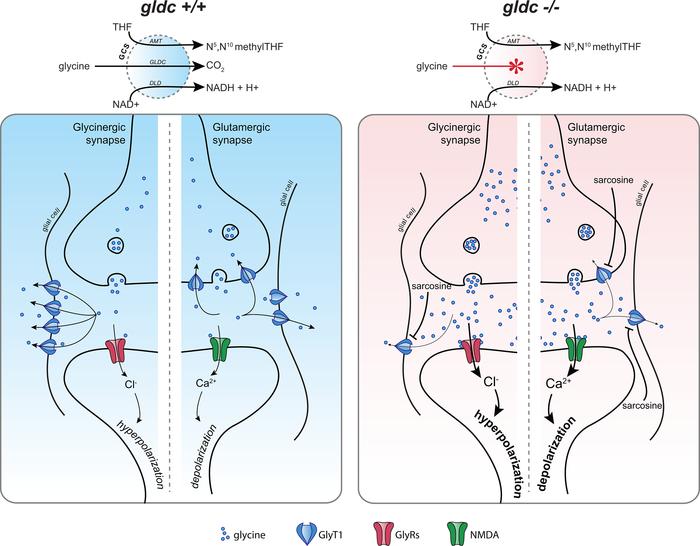