Down syndrome mouse models have an abnormal enteric nervous system

Down syndrome mouse models have an abnormal enteric nervous system

Children with trisomy 21 (Down syndrome [DS]) have a 130-fold increased incidence of Hirschsprung disease (HSCR), a developmental defect in which the enteric nervous system (ENS) is missing from the distal bowel (i.e., distal bowel is aganglionic). Treatment for HSCR is surgical resection of aganglionic bowel, but many children have bowel problems after surgery. Postsurgical problems, such as enterocolitis and soiling, are especially common in children with DS. To determine how trisomy 21 affects ENS development, we evaluated the ENS in 2 DS mouse models, Ts65Dn and Tc1. These mice are trisomic for many chromosome 21 homologous genes, including Dscam and Dyrk1a, which are hypothesized to contribute to HSCR risk. Ts65Dn and Tc1 mice have normal ENS precursor migration at E12.5 and almost normal myenteric plexus structure as adults. However, Ts65Dn and Tc1 mice have markedly reduced submucosal plexus neuron density throughout the bowel. Surprisingly, the submucosal neuron defect in Ts65Dn mice is not due to excess Dscam or Dyrk1a, since normalizing copy number for these genes does not rescue the defect. These findings suggest the possibility that the high frequency of bowel problems in children with DS and HSCR may occur because of additional unrecognized problems with ENS structure. 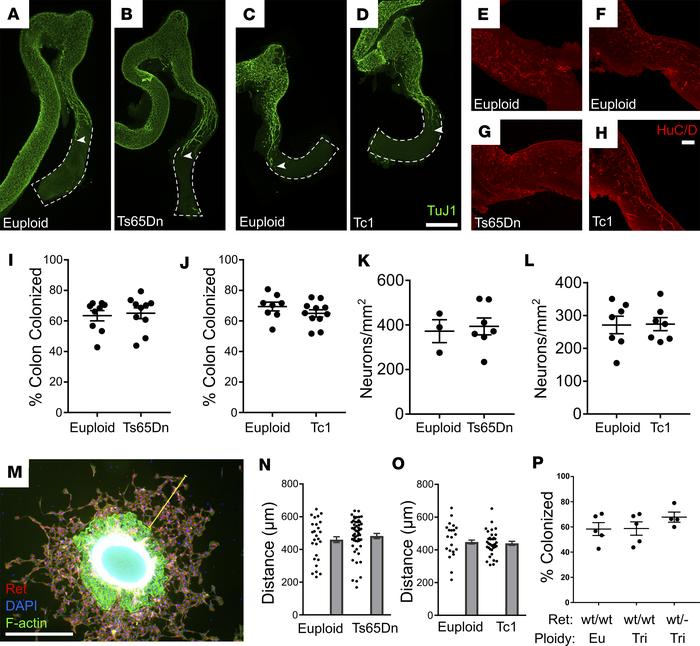