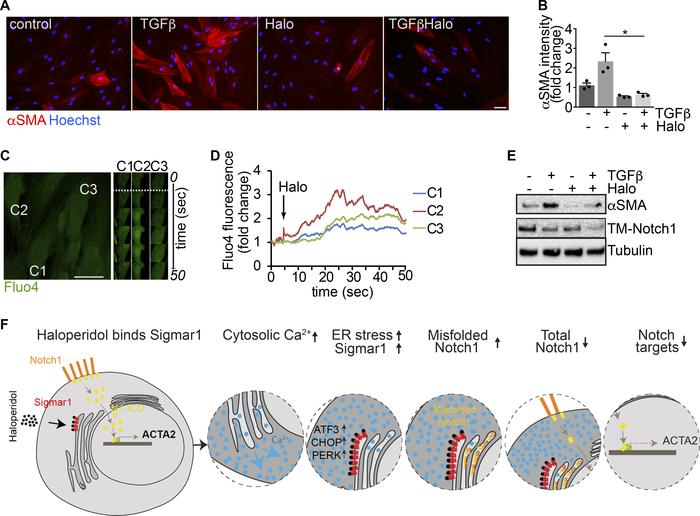 () Adult human dermal fibroblasts treated with TGF-β, haloperidol, or their combination and stained with anti-αSMA antibodies (red). Nuclei are stained blue with Hoechst. () Quantification of the αSMA mean fluorescence intensity upon treatment with TGF-β, haloperidol, or their combination ( = 3/gp). Values are mean ± SEM. * < 0.05 by unpaired test. () Representative images of human fibroblasts loaded with the calcium-sensitive dye Fluo4 and treated with haloperidol at the time indicated by the dashed line. Time-lapse images of specific regions of interest (ROIs) in 3 different cells (C1, C2, and C3) are shown on the right. () Quantification of mean fluorescence intensity in each ROI (C1 in blue, C2 in red, and C3 in green) upon addition of haloperidol at the time indicated by the arrow. () Western blot showing the expression of TM-Notch1 and αSMA after treatment with TGF-β, haloperidol, or their combination. Tubulin is used as loading control. Blot for αSMA was run in parallel. () Schematic of a proposed model for the mechanism of action of haloperidol in regulating the expression of αSMA in fibroblasts. Scale bars in and : 50 μm.