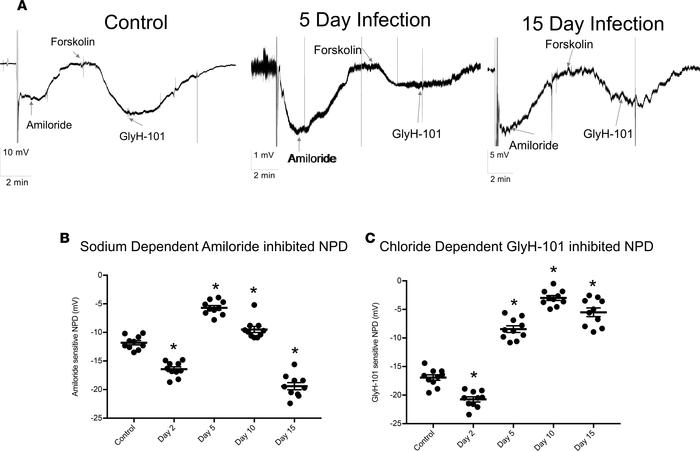 Mice were infected with 4,000 PFU of PR8ΔGFP. NPD of control and infected mice were measured as described in Methods. () Recording traces depicting NPD in noninfected control mice, immediately after the probe was inserted in one the mouse nares; a negative voltage deflection was recorded and is indicative of the active Na+ ion absorption. Addition of 200 μM amiloride in the perfusate inhibited the voltage difference, indicating the role of ENaC in maintaining the initially recorded NPD. Subsequent perfusion with 10–20 μM forskolin activated a second potential difference due to the movement of Cl– and HCO3–, which was inhibited by 50 μM GlyH-101, showing the role of CFTR in this process. Representative NPD recordings from uninfected (Control) mice, 5 and 15 days p.i. are shown, with the electrical potential scale noted for each time point (bottom left). () ENaC activity, as measured by NPD across time course of IAV. Scatter plots with NPD value ± SEM at 2, 5, 10, and 15 days p.i. () Scatter plots of GlyH-101–sensitive (CFTR) NPD at days 2, 5, 10, and 15 p.i. Each data point corresponds to a single mouse, = 9–13 per group; mean ± SEM. Significance was determined by 1-way ANOVA and post hoc Tukey test for multiple comparisons. * < 0.0001 compared with noninfected controls.