Spinocerebellar ataxia type 1 (SCA1) is a dominantly inherited ataxia caused by expansion of a translated CAG repeat encoding a glutamine tract in the ataxin-1 (ATXN1) protein. Despite advances in understanding the pathogenesis of SCA1, there are still no therapies to alter its progressive fatal course. RNA-targeting approaches have improved disease symptoms in preclinical rodent models of several neurological diseases. Here, we investigated the therapeutic capability of an antisense oligonucleotide (ASO) targeting mouse Atxn1 in Atxn1154Q/2Q-knockin mice that manifest motor deficits and premature lethality. Following a single ASO treatment at 5 weeks of age, mice demonstrated rescue of these disease-associated phenotypes. RNA-sequencing analysis of genes with expression restored to WT levels in ASO-treated Atxn1154Q/2Q mice was used to demonstrate molecular differences between SCA1 pathogenesis in the cerebellum and disease in the medulla. Finally, select neurochemical abnormalities detected by magnetic resonance spectroscopy in vehicle-treated Atxn1154Q/2Q mice were reversed in the cerebellum and brainstem (a region containing the pons and the medulla) of ASO-treated Atxn1154Q/2Q mice. Together, these findings support the efficacy and therapeutic importance of directly targeting ATXN1 RNA expression as a strategy for treating both motor deficits and lethality in SCA1.

Reduction of RNA by ASO353 in brain regions of mice affected by SCA1. 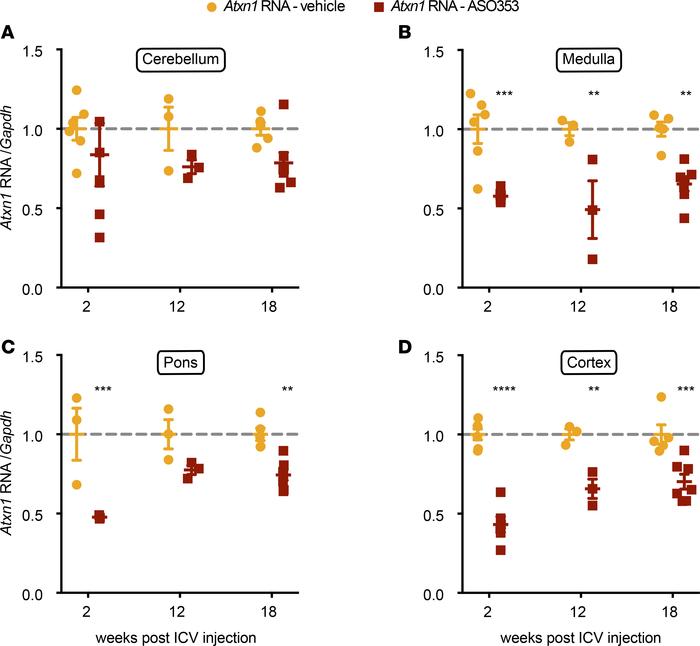