Hyaluronidase inhibits reactive adipogenesis and inflammation of colon and skin

Hyaluronidase inhibits reactive adipogenesis and inflammation of colon and skin

In this study we evaluated the role of hyaluronan (HA) in reactive adipogenesis, a local expansion of preadipocytes that provides host defense by release of antimicrobial peptides. We observed that HA accumulated during maturation of adipocytes in vitro and was associated with increased expression of preadipocyte factor 1, zinc finger protein 423, and early B cell factor 1. Although HA is normally abundant in the extracellular matrix, a further increase in HA staining occurred in mice at sites of reactive adipogenesis following injury of colon by dextran sodium sulfate or injury of skin from infection with Staphylococcus aureus. HA also abundantly accumulated around adipocytes seen in the colons of patients with inflammatory bowel disease. This HA was necessary for adipocyte maturation because digestion of HA by administration of soluble hyaluronidase or transgenic expression of hyaluronidase 1 inhibited adipogenesis in vitro and in vivo. Furthermore, hyaluronidase also suppressed inflammation of both skin and colon and decreased antimicrobial peptide expression by developing preadipocytes. This resulted in increased bacterial transit across the epithelial barrier despite decreased tissue injury from inflammation. These observations suggest HA plays an important role in reactive adipogenesis and host defense after injury. 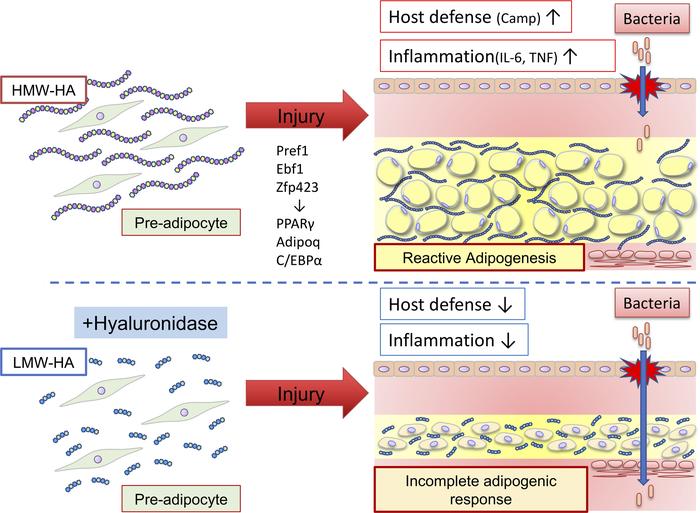