Arterial stiffening is a consequence of aging and a cholesterol-independent risk factor for cardiovascular disease (CVD). Arterial stiffening and CVD show a sex bias, with men more susceptible than premenopausal women. How arterial stiffness and sex interact at a molecular level to confer risk of CVD is not well understood. Here, we used the sexual dimorphism in LDLR-null mice to show that the protective effect of female sex on atherosclerosis is linked to reduced aortic stiffness and reduced expression of matrix metalloproteinase-12 (MMP12) by lesional macrophages. Deletion of MMP12 in LDLR-null mice attenuated the male sex bias for both arterial stiffness and atherosclerosis, and these effects occurred despite high serum cholesterol. Mechanistically, we found that oxidized LDL stimulates secretion of MMP12 in human as well as mouse macrophages. Estrogen antagonizes this effect by downregulating MMP12 expression. Our data support cholesterol-independent causal relationships between estrogen, oxidized LDL–induced secretion of macrophage MMP12, and arterial stiffness that protect against atherosclerosis in females and emphasize that reduced MMP12 functionality can confer atheroprotection to males. 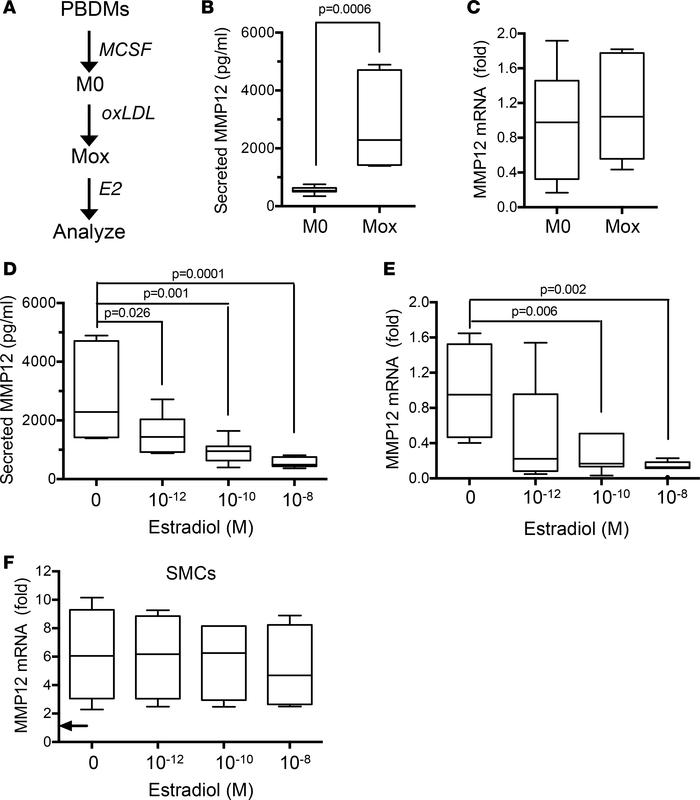