TGF-β is a promising immunotherapeutic target. It is expressed ubiquitously in a latent form that must be activated to function. Determination of where and how latent TGF-β (L-TGF-β) is activated in the tumor microenvironment could facilitate cell- and mechanism-specific approaches to immunotherapeutically target TGF-β. Binding of L-TGF-β to integrin αvβ8 results in activation of TGF-β. We engineered and used αvβ8 antibodies optimized for blocking or detection, which — respectively — inhibit tumor growth in syngeneic tumor models or sensitively and specifically detect β8 in human tumors. Inhibition of αvβ8 potentiates cytotoxic T cell responses and recruitment of immune cells to tumor centers — effects that are independent of PD-1/PD-L1. β8 is expressed on the cell surface at high levels by tumor cells, not immune cells, while the reverse is true of L-TGF-β, suggesting that tumor cell αvβ8 serves as a platform for activating cell-surface L-TGF-β presented by immune cells. Transcriptome analysis of tumor-associated lymphoid cells reveals macrophages as a key cell type responsive to β8 inhibition with major increases in chemokine and tumor-eliminating genes. High β8 expression in tumor cells is seen in 20%–80% of various cancers, which rarely coincides with high PD-L1 expression. These data suggest tumor cell αvβ8 is a PD-1/PD-L1–independent immunotherapeutic target. 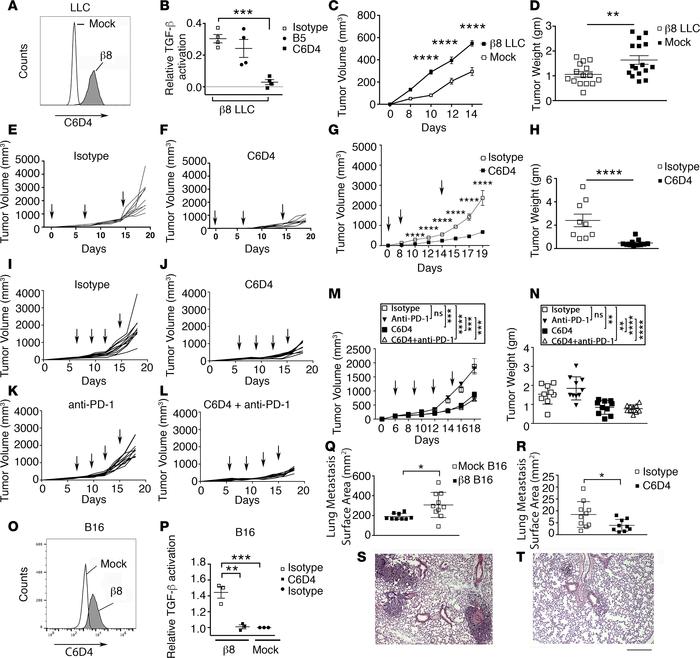