Offspring of women with gestational diabetes mellitus (GDM) are at increased risk of developing metabolic disease, potentially mediated by epigenetic mechanisms. We recruited 608 GDM and 626 control offspring from the Danish National Birth Cohort, aged between 9 and 16 years. DNA methylation profiles were measured in peripheral blood of 93 GDM offspring and 95 controls using the Illumina HumanMethylation450 BeadChip. Pyrosequencing was performed for validation/replication of putative GDM-associated, differentially methylated CpGs in additional 905 offspring (462 GDM, 444 control offspring). We identified 76 differentially methylated CpGs in GDM offspring compared with controls in the discovery cohort (FDR, P < 0.05). Adjusting for offspring BMI did not affect the association between methylation levels and GDM status for any of the 76 CpGs. Most of these epigenetic changes were due to confounding by maternal prepregnancy BMI; however, 13 methylation changes were independently associated with maternal GDM. Three prepregnancy BMI–associated CpGs (cg00992687 and cg09452568 of ESM1 and cg14328641 of MS4A3) were validated in the replication cohort, while cg09109411 (PDE6A) was found to be associated with GDM status. The identified methylation changes may reflect developmental programming of organ disease mechanisms and/or may serve as disease biomarkers. 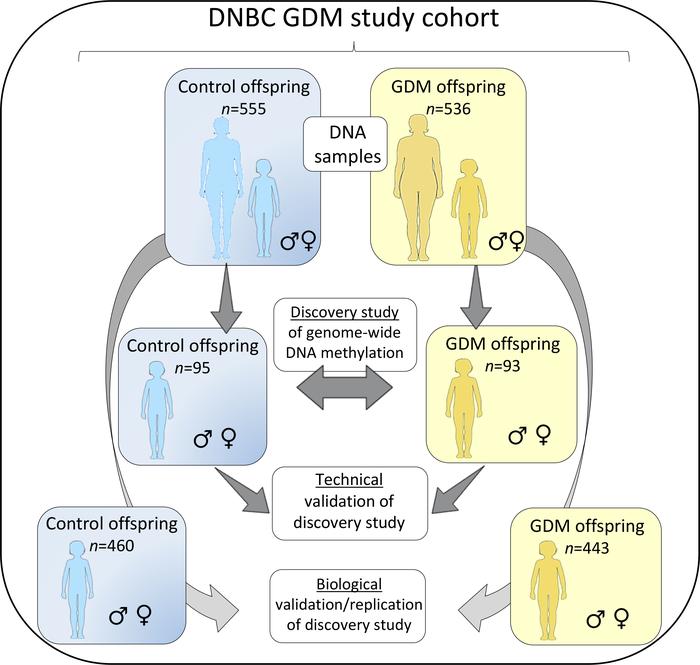