OXTR modulates a variety of behaviors in mammals, including social memory and recognition. Genetic and epigenetic dysregulation of OXTR has been suggested to be implicated in neuropsychiatric disorders, including autism spectrum disorder (ASD). While the involvement of DNA methylation is suggested, the mechanism underlying epigenetic regulation of OXTR is largely unknown. This has hampered the experimental design and interpretation of the results of epigenetic studies of OXTR in neuropsychiatric disorders. From the generation and characterization of a new line of Tet1 mutant mice — by deleting the largest coding exon 4 (Tet1Δe4) — we discovered for the first time to our knowledge that Oxtr has an array of mRNA isoforms and a complex transcriptional regulation. Select isoforms of Oxtr are significantly reduced in the brain of Tet1Δe4–/– mice. Accordingly, CpG islands of Oxtr are hypermethylated during early development and persist into adulthood. Consistent with the reduced express of OXTR, Tet1Δe4–/– mice display impaired maternal care, social behavior, and synaptic responses to oxytocin stimulation. Our findings elucidate a mechanism mediated by TET1 protein in regulating Oxtr expression by preventing DNA hypermethylation of Oxtr. The discovery of epigenetic dysregulation of Oxtr in TET1-deficient mouse brain supports the necessity of a reassessment of existing findings and a value of future studies of OXTR in neuropsychiatric disorders.

Generation and characterization of mutant (Δe4) ESCs and mice. 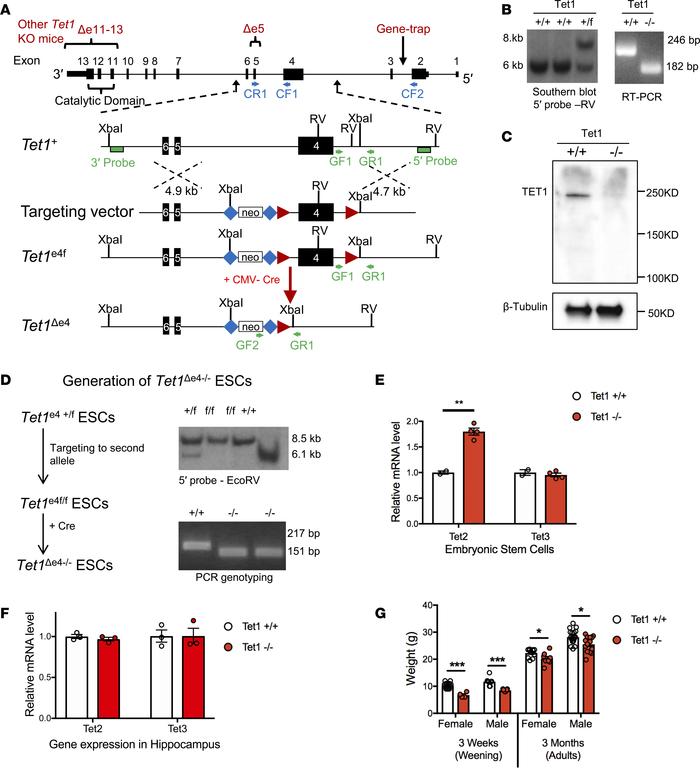