GARP, a cell surface docking receptor for binding and activating latent TGF-β, is highly expressed by platelets and activated Tregs. While GARP is implicated in immune invasion in cancer, the roles of the GARP-TGF-β axis in systemic autoimmune diseases are unknown. Although B cells do not express GARP at baseline, we found that the GARP-TGF-β complex is induced on activated human and mouse B cells by ligands for multiple TLRs, including TLR4, TLR7, and TLR9. GARP overexpression on B cells inhibited their proliferation, induced IgA class-switching, and dampened T cell–independent antibody production. In contrast, B cell–specific deletion of GARP-encoding gene Lrrc32 in mice led to development of systemic autoimmune diseases spontaneously as well as worsening of pristane-induced lupus-like disease. Canonical TGF-β signaling more readily upregulates GARP in Peyer patch B cells than in splenic B cells. Furthermore, we demonstrated that B cells are required for the induction of oral tolerance of T cell–dependent antigens via GARP. Our studies reveal for the first time to our knowledge that cell surface GARP-TGF-β is an important checkpoint for regulating B cell peripheral tolerance, highlighting a mechanism of autoimmune disease pathogenesis.

B cell–intrinsic GARP is indispensable for oral tolerance. 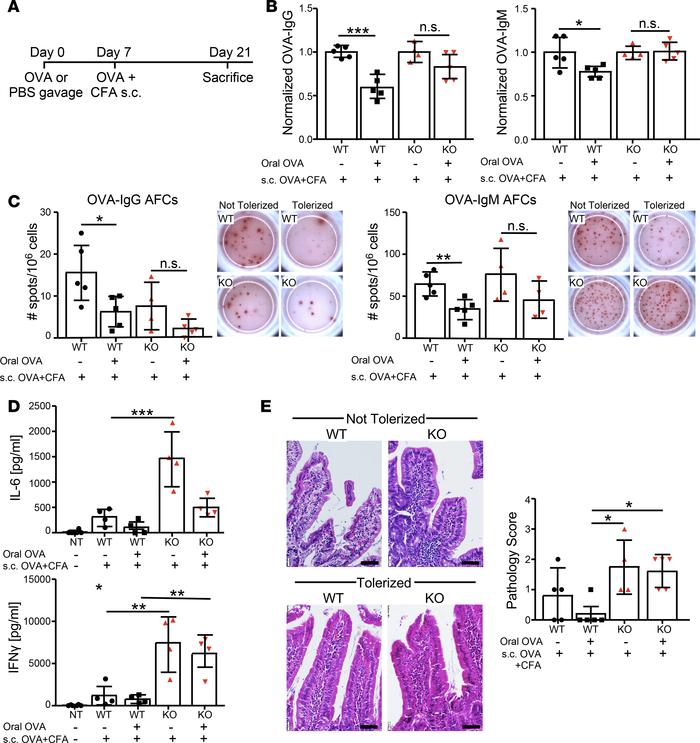 () Schematic of oral tolerance model. Mice were given 25 mg OVA via gavage (tolerized) or PBS (not tolerized) as control, after which all mice received 100 μg OVA emulsified in 100 μl CFA s.c. Endpoint analysis occurred on day 21, when mice were sacrificed. () OVA-specific IgG and IgM were detected in the sera of mice by ELISA ( = 4–5 biological replicates). () Splenic mononuclear cells were obtained from mice by mechanical separation and then cultured in OVA-coated ELISPOT plates for 20 hours, followed by detection with anti-mouse IgG1 and IgM. Quantitative data and representative well images are shown. () CD4+ T cells were isolated by magnetic bead–positive selection from the spleens of WT and KO tolerized and nontolerized mice. CD4+ T cells were cultured in a 1:1 ratio with irradiated WT naive splenocytes in the presence of OVA for 4 days. No treatment (NT) indicates CD4+ cells cultured without OVA. Supernatants were collected, and IL-6 and IFN-γ levels were measured by ELISA. () Proximal (duodenum) small intestine tissues were fixed and sectioned, followed by H&E staining. Representative images show duodenum villi. Graphical analysis of pathology score analyzed by a pathologist blinded to the treatment is shown. Statistical analysis was performed by 2-tailed test ( and ) and 1-way ANOVA with Tukey’s multiple comparisons ( and ); * < 0.05, ** < 0.01, *** < 0.001. Error bars represent SD.