Current obesity interventions suffer from lack of durable effects and undesirable complications. Fumagillin, an inhibitor of methionine aminopeptidase-2, causes weight loss by reducing food intake, but with effects on weight that are superior to pair-feeding. Here, we show that feeding of rats on a high-fat diet supplemented with fumagillin (HF/FG) suppresses the aggressive feeding observed in pair-fed controls (HF/PF) and alters expression of circadian genes relative to the HF/PF group. Multiple indices of reduced energy expenditure are observed in HF/FG but not HF/PF rats. HF/FG rats also exhibit changes in gut hormones linked to food intake, increased energy harvest by gut microbiota, and caloric spilling in the urine. Studies in gnotobiotic mice reveal that effects of fumagillin on energy expenditure but not feeding behavior may be mediated by the gut microbiota. In sum, fumagillin engages weight loss–inducing behavioral and physiologic circuits distinct from those activated by simple caloric restriction. 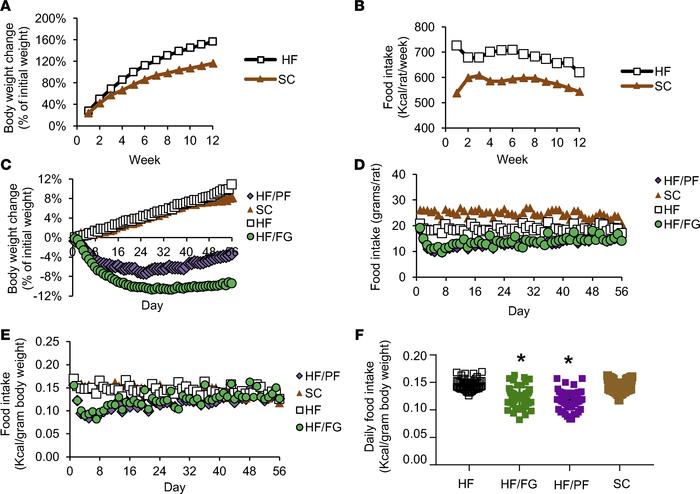 () Body weight changes (% increase relative to starting weight) over the initial 12 weeks of feeding of HF or SC diets. Data are means of = 86 for the HF group and = 26 for the SC group. Weight gain was significantly different in the HF versus SC animals after 1 week of feeding ( < 0.0012). () Mean caloric intake over the 12-week feeding period in HF and SC diet groups, expressed as Kcal/rat/week. The difference between groups are significant at all time points ( < 0.0004). () After the initial 12-week feeding period, animals were divided into 4 intervention groups: (i) HF rats continued on HF diet ad libitum (HF); (ii) SC rats continued on SC diet ad libitum (SC); (iii) HF rats switched to HF/FG diet ad libitum (HF/FG; (iv) HF rats pair-fed on HF diet (HF/PF) to match food intake of the HF/FG group. Body weight change is expressed as percent change relative to the start of the intervention period. Beginning at day 5 of intervention, the HF/FG and HF/PF rats lost weight compared with HF or SC ( = 0.04–0.00001). Data represent = 26 for HF, HF/PF, and SC groups at 2 weeks of diet intervention and an = 13 for these groups between 2–8 weeks of intervention. For HF/FG, = 34 at 2 weeks of diet intervention and = 17 from 2–8 weeks. () Mean daily food intake in the 4 intervention groups described in expressed as grams of food consumed/rat. () Daily caloric intake for the groups described in , expressed as Kcal/gram body weight/day. The HF and SC groups and the HF/FG and HF/PF groups were not different at any time point. Consumption of HF and HF/FG diets were significantly different ( < 0.024) from day 2–38, except for days 13, 19, 20, 27, 32, 36, and 37. Consumption of HF food by the HF and HF/PF groups were significantly different ( < 0.015) from day 1–38, except for days 20, 27, 32, 36, and 37. () Mean daily caloric intake, Kcal/gram body weight/day, for groups described in . Data are mean ± SD, with * < 0.05 when compared with either HF or SC group. Two-tailed, unpaired tests were performed in all panels. < 0.05 with a Bonferroni correction was used to define statistical significance among groups.