BACKGROUND. HELLP (hemolysis, elevated liver enzymes, and low platelets) syndrome is a severe variant of hypertensive disorders of pregnancy affecting approximately 1% of all pregnancies, and has significant maternal and fetal morbidity. Previously, we showed that upregulation of the alternative pathway of complement (APC) plays a role in HELLP syndrome. We hypothesize that HELLP syndrome follows a 2-hit disease model similar to atypical hemolytic uremic syndrome (aHUS), requiring both genetic susceptibility and an environmental risk factor. Our objective was to perform a comparative analysis of the frequency of APC activation and germline mutations in affected women and to create a predictive model for identifying HELLP syndrome. METHODS. Pregnant women with HELLP syndrome, and healthy controls after 23 weeks of gestation were recruited, along with aHUS and thrombotic thrombocytopenic purpura participants. We performed a functional assay, the mHam, and targeted genetic sequencing in all groups. RESULTS. Significantly more participants with rare germline mutations in APC genes were present in the HELLP cohort compared with controls (46% versus 8%, P = 0.01). In addition, significantly more HELLP participants were positive for the mHam when compared with controls (62% versus 16%, P = 0.009). Testing positive for both a germline mutation and the mHam was highly predictive for the diagnosis of HELLP syndrome. CONCLUSION. HELLP syndrome is characterized by both activation of the APC and frequent germline mutations in APC genes. Similar to aHUS, treatment via complement inhibition to mitigate maternal and fetal morbidity and mortality may be possible. FUNDING. National Heart Lung and Blood Institute grants T32HL007525 and R01HL133113. 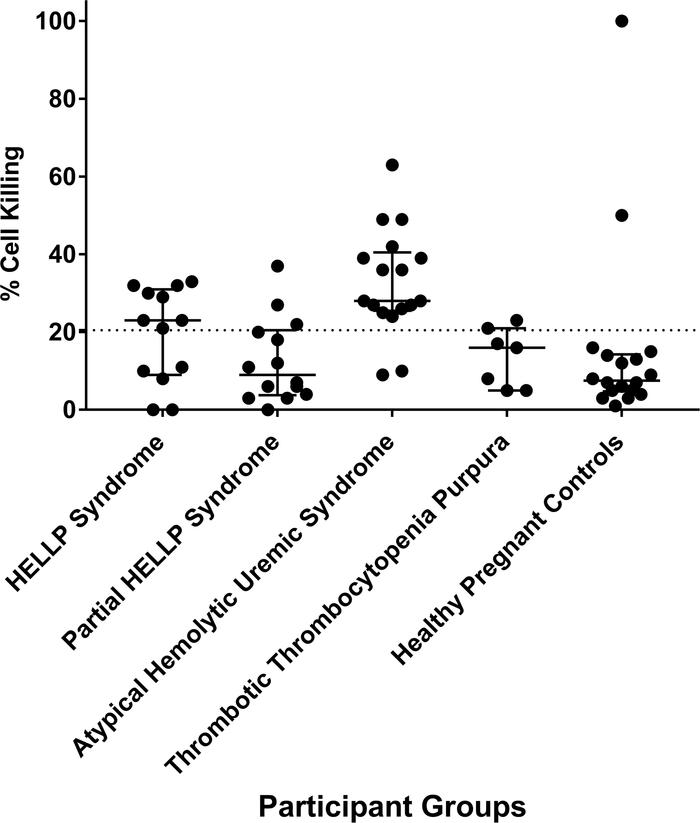 Each participant is represented as a black circle, and cell killing in the mHAM assay is displayed as a continuous variable for each participant group. The median and interquartile range of 25%–75% is depicted for each group. Statistical analysis demonstrating significant differences between groups using the mHam as a binary measure (positive vs. negative) is shown in . A positive mHam is defined as cell killing of greater than 20.5% (dashed black horizontal line). HELLP, hemolysis, elevated liver enzymes, and low platelets.