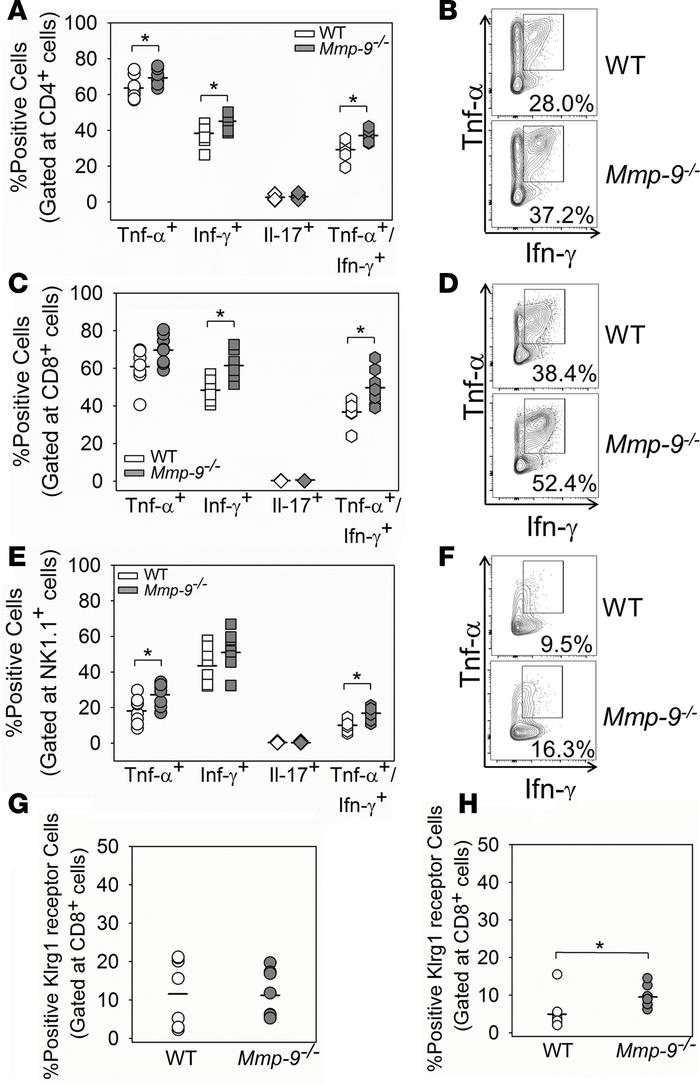 WT and mice were infected with an LD20 inoculum of H1N1 via the intranasal route (8 mice per group), and BAL was performed on day 7 p.i. BAL leukocytes were immunostained to identify CD4+ and CD8+ T cells, NK cells (NK1.1+), and to measure intracellular cytokines (Tnf-α, Ifn-γ, and Il-17) in these cells using flow cytometry. Frequencies of BAL CD4+ T cells ( and ), CD8+ T cells ( and ), and NK cells ( and ) are shown. Gating was conducted on Tnf-α+ single-positive cells, Ifn-γ+ single-positive cells, Il-17+ single-positive cells, and Tnf-α+Ifn-γ+ double-positive cells. The horizontal bars show the mean values. The rectangles in the histograms (, , and ) show the Tnf-α+Ifn-γ+ double-positive cells in each T cell subset. ( and ) BAL leukocytes were immunostained and for the inhibitory receptor, Klrg1, and markers of CD4+ () and CD8+ T cells () and analyzed using flow cytometry. Data were analyzed with 1-way ANOVAs followed by 2-sided Student’s tests (, , and ) or followed by 2-sided Mann-Whitney tests ( and ). * < 0.05 versus the group indicated.