Lung cancer patients treated with tyrosine kinase inhibitors (TKIs) often develop resistance. More effective and safe therapeutic agents are urgently needed to overcome TKI resistance. Here, we propose a medical genetics–based approach to identify indications for over 1,000 US Food and Drug Administration–approved (FDA-approved) drugs with high accuracy. We identified a potentially novel indication for an approved antidepressant drug, sertraline, for the treatment of non–small cell lung cancer (NSCLC). We found that sertraline inhibits the viability of NSCLC cells and shows a synergy with erlotinib. Specifically, the cotreatment of sertraline and erlotinib effectively promotes autophagic flux in cells, as indicated by LC3-II accumulation and autolysosome formation. Mechanistic studies further reveal that dual treatment of sertraline and erlotinib reciprocally regulates the AMPK/mTOR pathway in NSCLC cells. The blockade of AMPK activation decreases the anticancer efficacy of either sertraline alone or the combination. Efficacy of this combination regimen is decreased by pharmacological inhibition of autophagy or genetic knockdown of ATG5 or Beclin 1. Importantly, our results suggest that sertraline and erlotinib combination suppress tumor growth and prolong mouse survival in an orthotopic NSCLC mouse model (P = 0.0005). In summary, our medical genetics–based approach facilitates discovery of new anticancer indications for FDA-approved drugs for the treatment of NSCLC.

Sertraline alone and in combination with erlotinib induces autophagy through reciprocally regulating the AMPK/mTOR pathway. 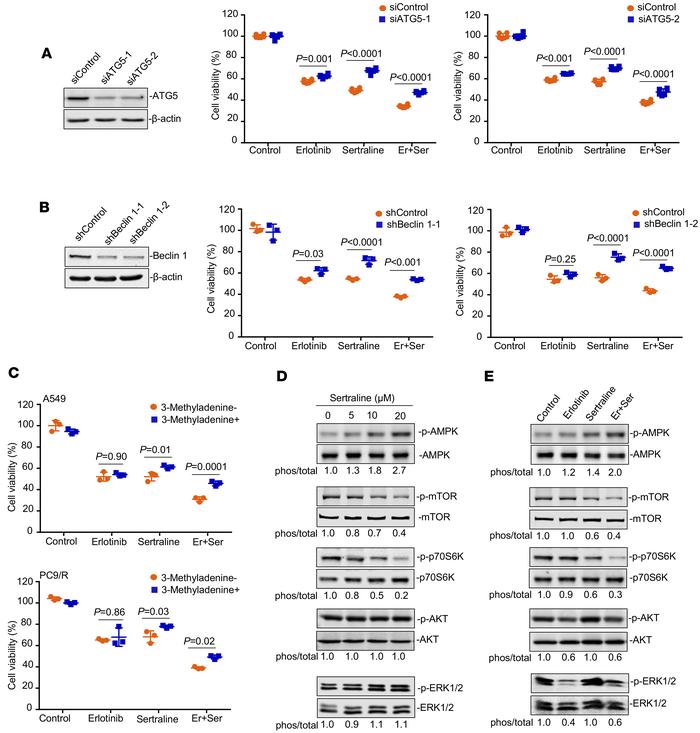 ( and ) Silence of ATG5 and Beclin1 significantly impaired the anticancer effect of sertraline or sertraline/erlotinib. A549 cells transiently transfected with siControl/shControl or siATG5/shBeclin1 were treated with erlotinib (10 μM), sertraline (10 μM), or drug combination for 48 hours ( = 3). Immunoblotting was used to determine the efficiency of the knockdown. () Pharmacological blockade of autophagy by 3-Methyladenine (3-MA) significantly inhibited the antitumor activity of sertraline or the drug pair in A549 and PC9/R cells. Cells were pretreated with 3-MA (1 mM) for 6 hours, followed by the treatments of erlotinib (10 μM), sertraline (10 μM), or drug combination for 48 hours. All data was represented as mean ± SD ( = 3). ( and ) A549 cells were treated with various concentrations of sertraline (5, 10, and 20 μM) or combination for 24 hours. The phosphorylation and basal levels of several key regulators of autophagy were probed by Western blotting. Quantification of relative density was shown. All experiments were performed independently in triplicate. values in () were analyzed by 2-way ANOVA, followed Sidak’s multiple comparisons test, and < 0.05 was considered statistically significant. Er, erlotinib; Ser, sertraline.