CXCL9 and CXCL10 expression and regulation in immune cells in PbA-infected brains. 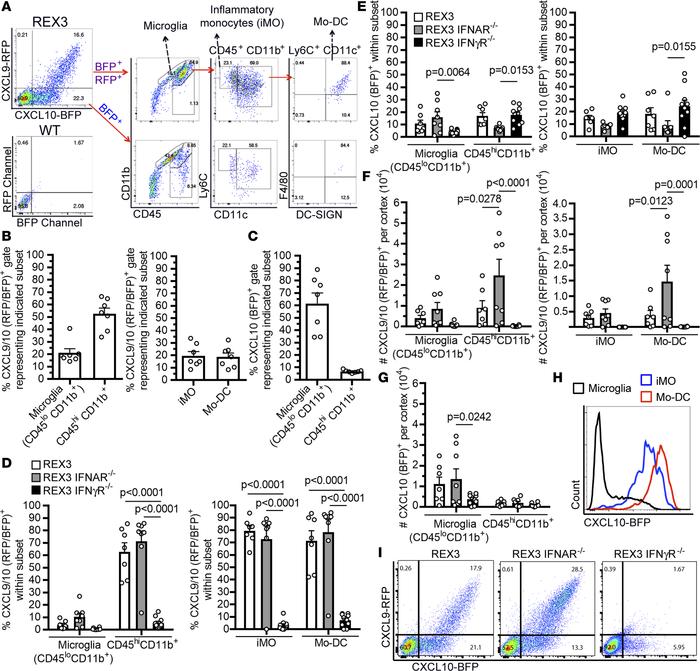 REX3 (white bars), REX3- (IFNAR–/–, gray bars), REX3- (IFNγR–/–, black bars), and WT mice were infected with ANKA (PbA) and on day 8 or 9 single-cell suspensions of brain cortices (Percoll-enriched for leukocytes) were analyzed by flow cytometry. () The left most dotplots are from REX3 and WT cortex single-cell suspension and are stained with viability dye and gated on live single cells only. The gating strategy shown is used in panels and and also shows the markers used to select the immune subsets shown panels –. Percentage of () CXCL9 and CXCL10 (RFP+BFP+) double-positive or () CXCL10 (BFP+) single-positive cells within each immune cell subset in REX3 mice. Percentage of each indicated subset expressing () CXCL9 and CXCL10 (RFP+BFP+) or () CXCL10 only (BFP+). Number of cells in each indicated subset expressing () CXCL9 and CXCL10 (RFP+BFP+) or () CXCL10 only (BFP+) per brain. () Histogram depicting the CXCL10-BFP levels in microglia (black line), inflammatory monocytes (iMOs) (blue line), and monocyte-derived DCs (Mo-DCs) (red line). () Dot plots showing CXCL9-RFP and CXCL10-BFP expression on Percoll gradient–enriched leukocytes isolated from the brains of REX3, REX3-, and REX3- mice. In –, all graphs are gated on all live cells. The numbers of mice/group total from 3 independent experiments were as follows: REX3 = 7, REX3- = 8, and REX3- = 10. The groups in – were compared using 2-way ANOVA with Bonferroni’s multiple comparison test. Bars represent the mean with SEM in all plots.