Inflammation accompanies heart failure and is a mediator of cardiac fibrosis. CaMKIIδ plays an essential role in adverse remodeling and decompensation to heart failure. We postulated that inflammation is the mechanism by which CaMKIIδ contributes to adverse remodeling in response to nonischemic interventions. We demonstrate that deletion of CaMKIIδ in the cardiomyocyte (CKO) significantly attenuates activation of NF-κB, expression of inflammatory chemokines and cytokines, and macrophage accumulation induced by angiotensin II (Ang II) infusion. The inflammasome was activated by Ang II, and this response was also diminished in CKO mice. These events occurred prior to any evidence of Ang II–induced cell death. In addition, CaMKII-dependent inflammatory gene expression and inflammasome priming were observed as early as the third hour of infusion, a time point at which macrophage recruitment was not evident. Inhibition of either the inflammasome or monocyte chemoattractant protein 1 (MCP1) signaling attenuated macrophage accumulation, and these interventions, like cardiomyocyte CaMKIIδ deletion, diminished the fibrotic response to Ang II. Thus, activation of CaMKIIδ in the cardiomyocyte represents what we believe to be a novel mechanism for initiating inflammasome activation and an inflammatory gene program that leads to macrophage recruitment and ultimately to development of fibrosis. 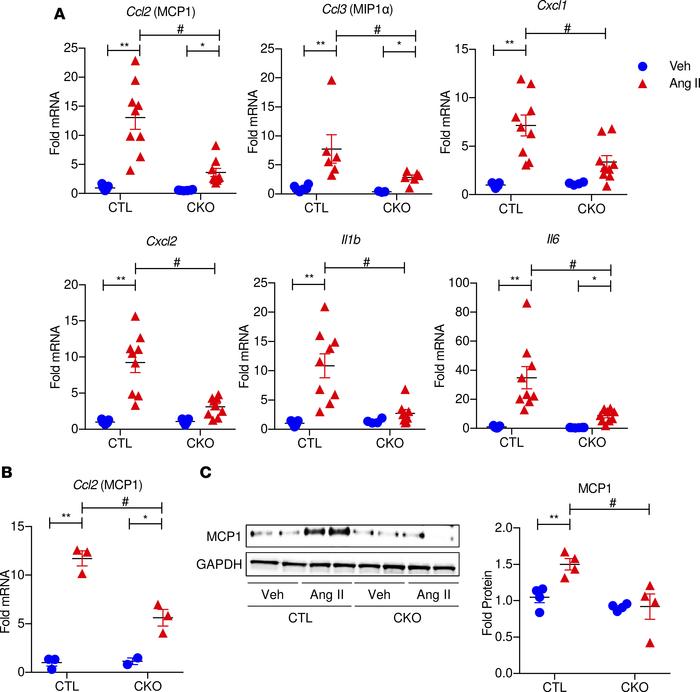