NK cell–based immunotherapies have been gaining traction in the clinic for treatment of cancer. IL-15 is currently being used in number of clinical trials to improve NK cell expansion and function. The objective of this study is to evaluate the effect of repetitive IL-15 exposure on NK cells. An in vitro model in which human NK cells are continuously (on on on) or intermittently (on off on) treated with IL-15 was used to explore this question. After treatment, cells were evaluated for proliferation, survival, cell cycle gene expression, function, and metabolic processes. Our data indicate that continuous treatment of NK cells with IL-15 resulted in decreased viability and a cell cycle arrest gene expression pattern. This was associated with diminished signaling, decreased function both in vitro and in vivo, and reduced tumor control. NK cells continuously treated with IL-15 also displayed a reduced mitochondrial respiration profile when compared with NK cells treated intermittently with IL-15. This profile was characterized by a decrease in the spare respiratory capacity that was dependent on fatty acid oxidation (FAO). Limiting the strength of IL-15 signaling via utilization of an mTOR inhibitor rescued NK cell functionality in the group continuously treated with IL-15. The findings presented here show that human NK cells continuously treated with IL-15 undergo a process consistent with exhaustion that is accompanied by a reduction in FAO. These findings should inform IL-15–dosing strategies in NK cell cancer immunotherapeutic settings. 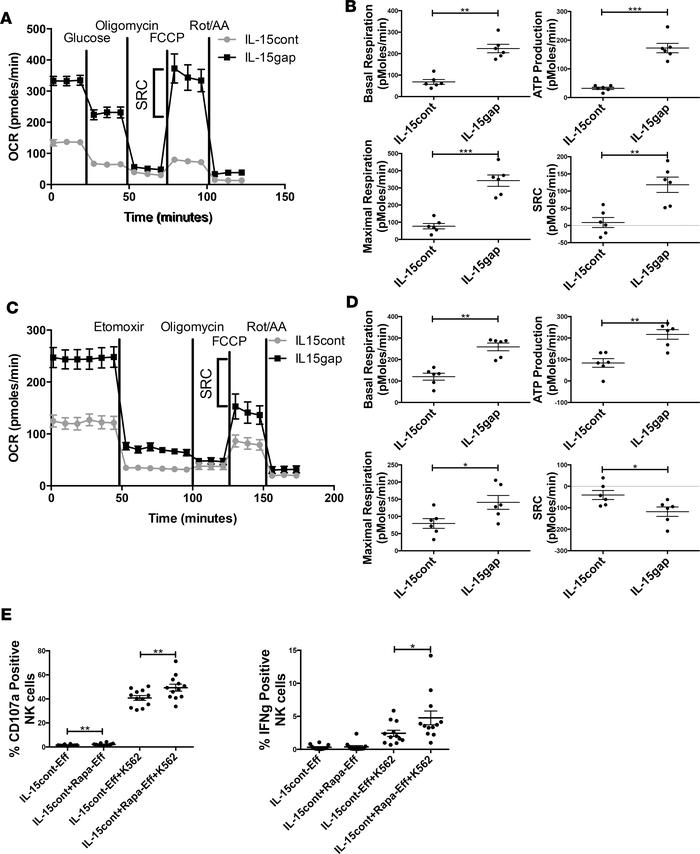