Although the cause of hypertension among individuals with obesity and insulin resistance is unknown, increased plasma insulin, acting in the kidney to increase sodium reabsorption, has been proposed as a potential mechanism. Insulin may also stimulate glucose uptake, but the contributions of tubular insulin signaling to sodium or glucose transport in the setting of insulin resistance is unknown. To directly study the role of insulin signaling in the kidney, we generated inducible renal tubule–specific insulin receptor–KO mice and used high-fat feeding and mineralocorticoids to model obesity and insulin resistance. Insulin receptor deletion did not alter blood pressure or sodium excretion in mice on a high-fat diet alone, but it mildly attenuated the increase in blood pressure with mineralocorticoid supplementation. Under these conditions, KO mice developed profound glucosuria. Insulin receptor deletion significantly reduced SGLT2 expression and increased urinary glucose excretion and urine flow. These data demonstrate a direct role for insulin receptor–stimulated sodium and glucose transport and a functional interaction of insulin signaling with mineralocorticoids in vivo. These studies uncover a potential mechanistic link between preserved insulin sensitivity and renal glucose handling in obesity and insulin resistance. 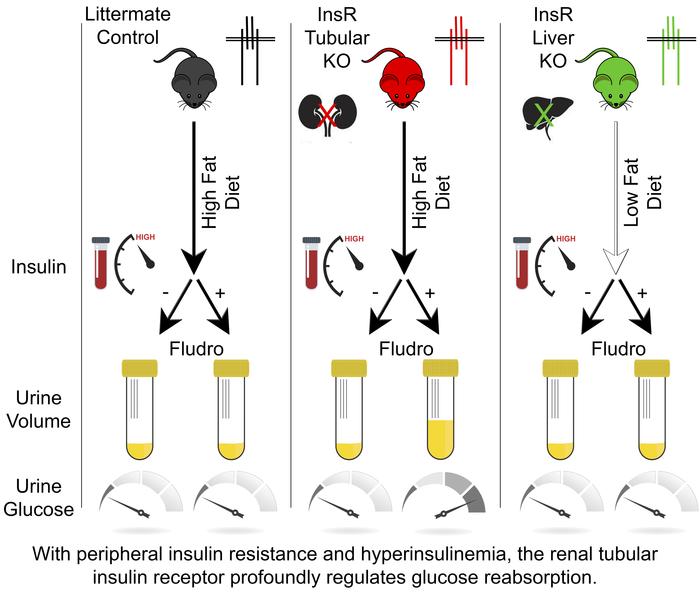