Respiratory syncytial virus (RSV) infects almost all infants by 2 years of age, and severe bronchiolitis resulting from RSV infection is the primary cause of hospitalization in the first year of life. Among infants hospitalized due to RSV-induced bronchiolitis, those with a specific mutation in the chemokine receptor CX3CR1, which severely compromises binding of its ligand CX3CL1, were at a higher risk for more severe viral bronchiolitis than those without the mutation. Here, we show that RSV infection of newborn mice deficient in CX3CR1 leads to significantly greater neutrophilic inflammation in the lungs, accompanied by an increase in mucus production compared with that induced in WT mice. Analysis of innate and adaptive immune responses revealed an early increase in the number of IL-17+ γδ T cells in CX3CR1-deficient mice that outnumbered IFN-γ+ γδ T cells as well as IFN-γ+ NK cells, IFN-γ being host protective in the context of RSV infection. This bias toward IL-17+ γδ T cells persisted at a later time. The lungs of CX3CR1-deficient mice expressed higher levels of IL-1β mRNA and protein, and blockade of IL-1β signaling using IL-1 receptor antagonist significantly reduced the number of IL-17+ γδ T cells in the lungs of infected mice. Blockade of IL-17RC abolished RSV-induced lung pathology in infected CX3CR1-deficient mice. We propose that, in infants harboring mutant CX3CR1, targeting the IL-17R may minimize disease severity and hospitalization in early life. 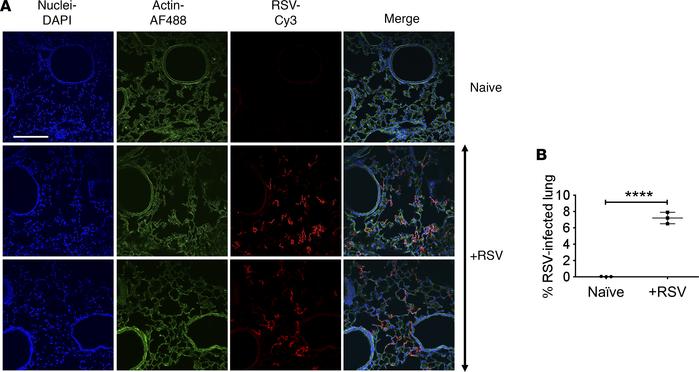