Reactivity of anti-IgG2 monoclonal and polyclonal reagents with the 29 IgG isoallotypes. 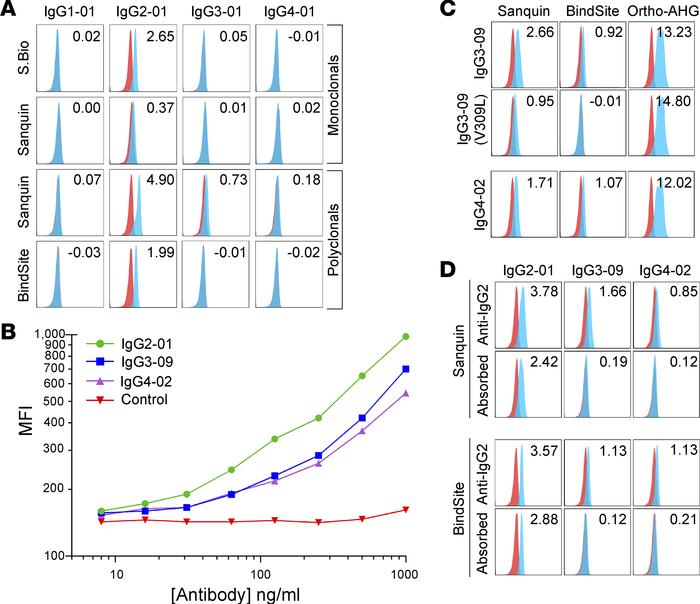 () Human RBCs with a phenotype of K+k+ (blue histograms) or K–k+ (red histograms; negative control) were stained with PUMA1 (specific for K+k+ cells) of the indicated human IgG subclass (labeled columns) and with the human IgG-specific reagents (labeled rows). While only canonical isoallotypes are shown, all 29 isoallotypes were tested in a similar manner, and data are presented in . () Titration of the Sanquin anti-IgG2 polyclonal reagent with staining of canonical IgG2-01, as well as cross-reactive isoallotypes IgG3-09 and IgG4-02. () Cross-reactivity of IgG3-09 and IgG4-02 with polyclonal anti-IgG2 reagents is eliminated by mutating valine at amino acid position 309 in the CH2 region to leucine. Binding of the pan-IgG detection reagent Ortho-AHG is shown for each variant to indicate that loss of staining is not due to loss of antibody expression. () Adsorption of cross-reactive antibodies using IgG3-09 and IgG4-02 backbones fused to a variable domain that binds an epitope (HLA) not expressed on RBCs results in elimination of cross-reactive detection, while maintaining binding to canonical IgG2-01. Data shown are MFIs representative of 3 replicate experiments; stain indices are shown (upper right corner) for each histogram as indicators of staining intensity above background (see Methods). S.Bio, Southern Biotech; BindSite, The Binding Site Group; Ortho, Ortho Clinical Diagnostics (see Methods for antibody details)