Human endogenous retroviruses (HERVs), remnants of ancestral viral genomic insertions, are known to represent 8% of the human genome and are associated with several pathologies. In particular, the envelope protein of HERV-W family (HERV-W-Env) has been involved in multiple sclerosis pathogenesis. Investigations to detect HERV-W-Env in a few other autoimmune diseases were negative, except in type-1 diabetes (T1D). In patients suffering from T1D, HERV-W-Env protein was detected in 70% of sera, and its corresponding RNA was detected in 57% of peripheral blood mononuclear cells. While studies on human Langerhans islets evidenced the inhibition of insulin secretion by HERV-W-Env, this endogenous protein was found to be expressed by acinar cells in 75% of human T1D pancreata. An extensive immunohistological analysis further revealed a significant correlation between HERV-W-Env expression and macrophage infiltrates in the exocrine part of human pancreata. Such findings were corroborated by in vivo studies on transgenic mice expressing HERV-W-env gene, which displayed hyperglycemia and decreased levels of insulin, along with immune cell infiltrates in their pancreas. Altogether, these results strongly suggest an involvement of HERV-W-Env in T1D pathogenesis. They also provide potentially novel therapeutic perspectives, since unveiling a pathogenic target in T1D. 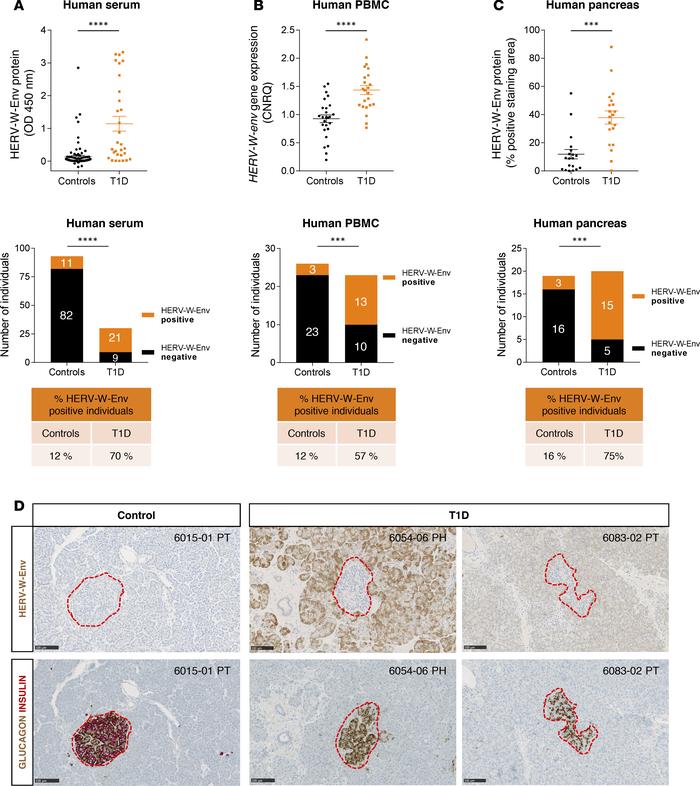