Sensing of pathogens by host pattern recognition receptors is essential for activating the immune response during infection. We used a nonlethal murine model of malaria (Plasmodium yoelii 17XNL) to assess the contribution of the pattern recognition receptor cyclic GMP-AMP synthase (cGAS) to the development of humoral immunity. Despite previous reports suggesting a critical, intrinsic role for cGAS in early B cell responses, cGAS-deficient (cGAS–/–) mice had no defect in the early expansion or differentiation of Plasmodium-specific B cells. As the infection proceeded, however, cGAS–/– mice exhibited higher parasite burdens and aberrant germinal center and memory B cell formation when compared with littermate controls. Antimalarial drugs were used to further demonstrate that the disrupted humoral response was not B cell intrinsic but instead was a secondary effect of a loss of parasite control. These findings therefore demonstrate that cGAS-mediated innate-sensing contributes to parasite control but is not intrinsically required for the development of humoral immunity. Our findings highlight the need to consider the indirect effects of pathogen burden in investigations examining how the innate immune system affects the adaptive immune response.

cGAS, STING, and type I interferon contribute to control of blood-stage infection. 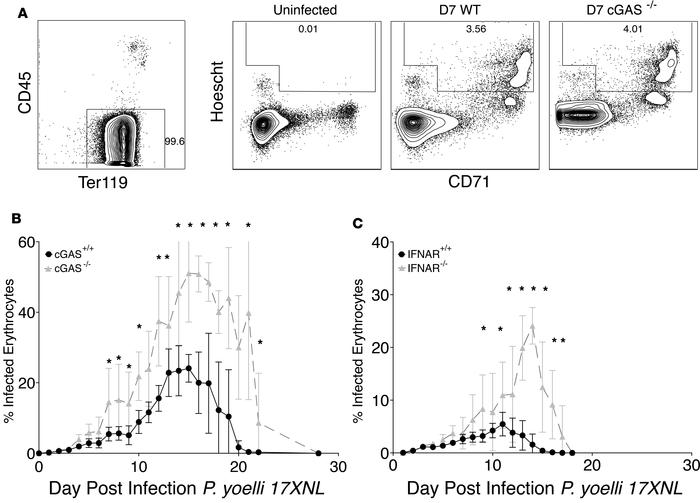