Development of gastric cancer is often preceded by chronic inflammation, but the immune cellular mechanisms underlying this process are unclear. Here we demonstrated that an inflammasome molecule, absent in melanoma 2 (Aim2), was upregulated in patients with gastric cancer and in spasmolytic polypeptide-expressing metaplasia of chronically Helicobacter felis–infected stomachs in mice. However, we found that Aim2 was not necessary for inflammasome function during gastritis. In contrast, Aim2 deficiency led to an increase in gastric CD8+ T cell frequency, which exacerbated metaplasia. These gastric CD8+ T cells from Aim2–/– mice were found to have lost their homing receptor expression (sphingosine-1-phosphate receptor 1 [S1PR1] and CD62L), a feature of tissue-resident memory T cells. The process was not mediated by Aim2-dependent regulation of IFN-β or by dendritic cell–intrinsic Aim2. Rather, Aim2 deficiency contributed to an increased production of CXCL16 by B cells, which could suppress S1PR1 and CD62L in CD8+ T cells. This study describes a potentially novel function of Aim2 that regulates CD8+ T cell infiltration and retention within chronically inflamed solid organ tissue. This function operates independent of the inflammasome, IFN-β, or dendritic cells. We provide evidence that B cells can contribute to this mechanism via CXCL16. 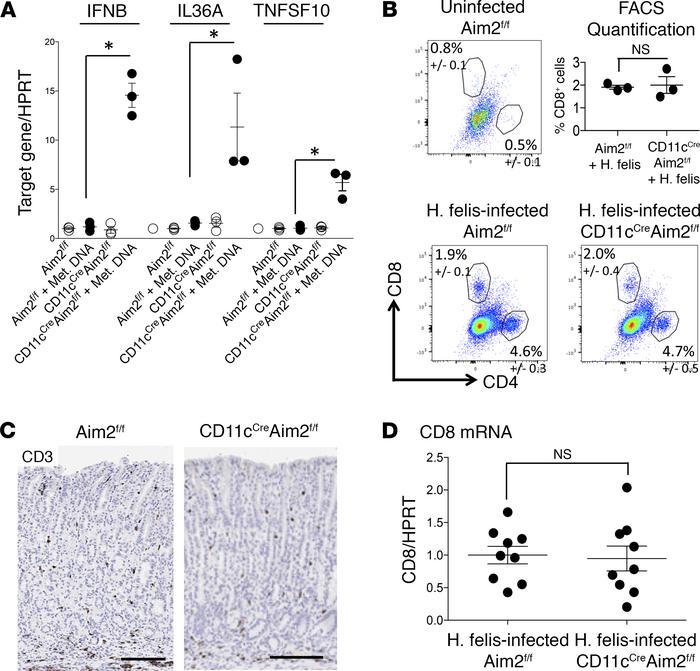