Lymphatic endothelium serves as a barrier to control fluid balance and immune cell trafficking to maintain tissue homeostasis. Long-term alteration of lymphatic vasculature promotes edema and fibrosis, which is an aggravating factor in the onset of cardiovascular diseases such as myocardial infarction. Apelin is a bioactive peptide that plays a central role in angiogenesis and cardiac contractility. Despite an established role of apelin in lymphangiogenesis, little is known about its function in the cardiac lymphatic endothelium. Here, we show that apelin and its receptor APJ were exclusively expressed on newly formed lymphatic vasculature in a pathological model of myocardial infarction. Using an apelin-knockout mouse model, we identified morphological and functional defects in lymphatic vasculature associated with a proinflammatory status. Surprisingly, apelin deficiency increased the expression of lymphangiogenic growth factors VEGF-C and VEGF-D and exacerbated lymphangiogenesis after myocardial infarction. Conversely, the overexpression of apelin in ischemic heart was sufficient to restore a functional lymphatic vasculature and to reduce matrix remodeling and inflammation. In vitro, the expression of apelin prevented the alteration of cellular junctions in lymphatic endothelial cells induced by hypoxia. In addition, we demonstrated that apelin controls the secretion of the lipid mediator sphingosine-1-phosphate in lymphatic endothelial cells by regulating the level of expression of sphingosine kinase 2 and the transporter SPNS2. Taken together, our results show that apelin plays a key role in lymphatic vessel maturation and stability in pathological settings. Thus, apelin may represent a novel candidate to prevent pathological lymphatic remodeling in diseases.

Apelin regulates S1P secretion and participates in the barrier integrity of the lymphatic endothelium in vitro. 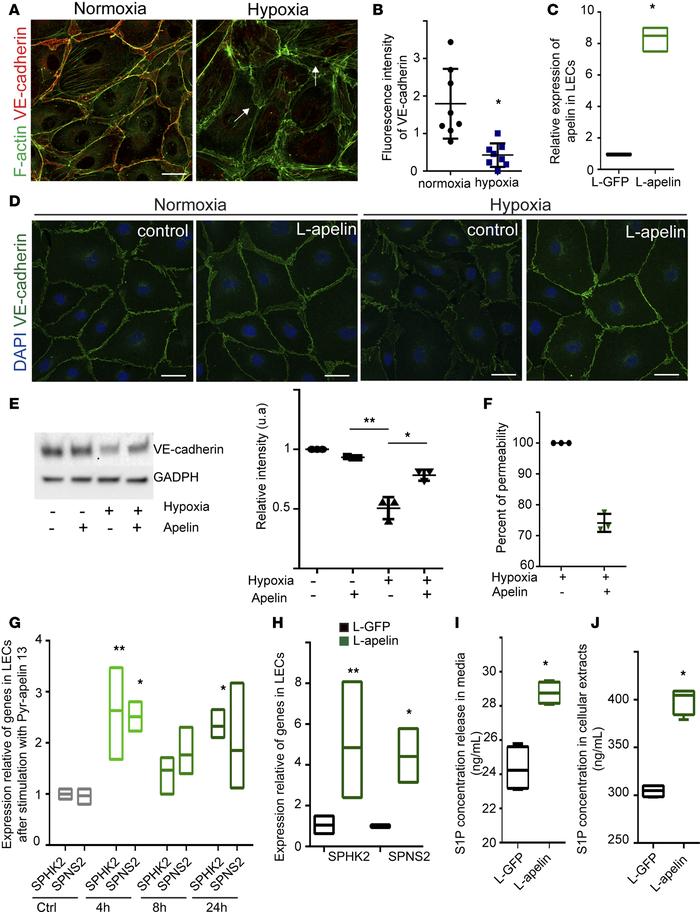