Lymphatic endothelium serves as a barrier to control fluid balance and immune cell trafficking to maintain tissue homeostasis. Long-term alteration of lymphatic vasculature promotes edema and fibrosis, which is an aggravating factor in the onset of cardiovascular diseases such as myocardial infarction. Apelin is a bioactive peptide that plays a central role in angiogenesis and cardiac contractility. Despite an established role of apelin in lymphangiogenesis, little is known about its function in the cardiac lymphatic endothelium. Here, we show that apelin and its receptor APJ were exclusively expressed on newly formed lymphatic vasculature in a pathological model of myocardial infarction. Using an apelin-knockout mouse model, we identified morphological and functional defects in lymphatic vasculature associated with a proinflammatory status. Surprisingly, apelin deficiency increased the expression of lymphangiogenic growth factors VEGF-C and VEGF-D and exacerbated lymphangiogenesis after myocardial infarction. Conversely, the overexpression of apelin in ischemic heart was sufficient to restore a functional lymphatic vasculature and to reduce matrix remodeling and inflammation. In vitro, the expression of apelin prevented the alteration of cellular junctions in lymphatic endothelial cells induced by hypoxia. In addition, we demonstrated that apelin controls the secretion of the lipid mediator sphingosine-1-phosphate in lymphatic endothelial cells by regulating the level of expression of sphingosine kinase 2 and the transporter SPNS2. Taken together, our results show that apelin plays a key role in lymphatic vessel maturation and stability in pathological settings. Thus, apelin may represent a novel candidate to prevent pathological lymphatic remodeling in diseases. 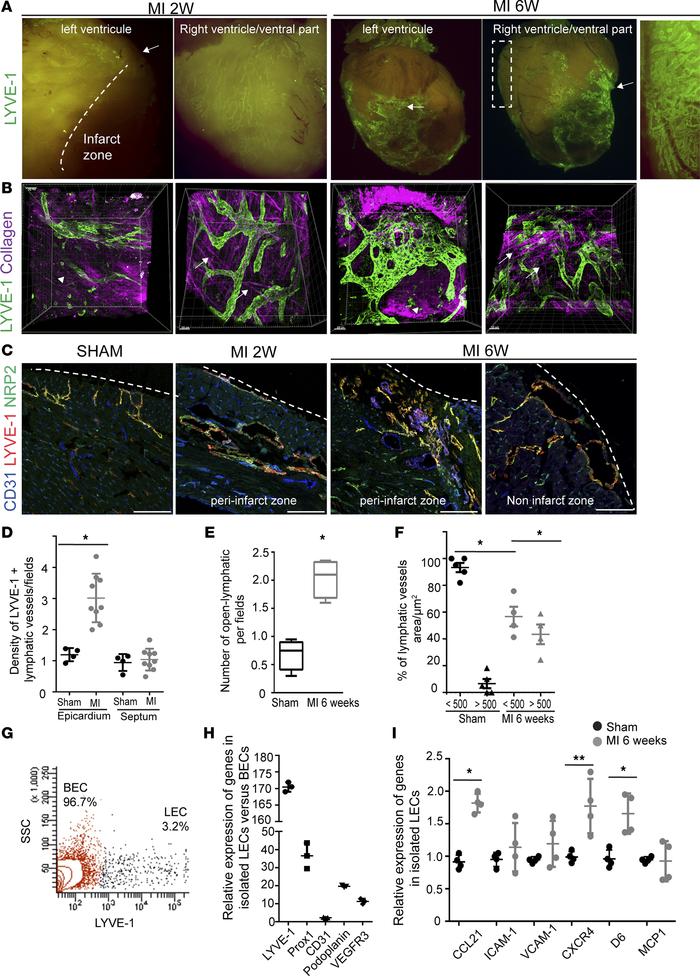 () Visualization of epicardial lymphatic vasculature by whole-mount heart immunostaining with LYVE-1 antibody 2 weeks or 6 weeks after myocardial infarction (MI). Dotted line indicates the limit of infarcted zone. Note the important remodeling of lymphatic vasculature that extends beyond the infarcted zone. Arrows indicate the position of the ligation. () Two-photon microscopic analysis of epicardial lymphatic vessels with LYVE-1 antibody. Two weeks after MI, the lymphatic network is disrupted and associated with disordered collagen fibers (arrowheads) close to the infarcted zone, while the lymphatic network on the ventral part is not affected. Note the presence of well-organized collagen fibers (arrows). Six weeks after MI, a strong, disorganized, and hyperplastic lymphatic network near the infarct zone that propagates to the opposite side of the MI can be seen. () Representative images of heart cross-section stained for LYVE-1, NRP2, and CD31 showing the remodeling of lymphatic vasculature after MI. Enlarged lymphatic vessels appear at the infarct border zone at 2 weeks after MI. Note that at 6 weeks after MI, dilated vessels are also present at a distance in the noninfarct zone. () LYVE-1–positive vessel density in the subepicardium and septum ( = 4–9, 20 fields were counted per condition). * < 0.004. () Number of open lymphatic vessels located at the subepicardial surface of the heart in sham and 6 weeks after MI ( = 4–9, 20 fields were counted per condition). * < 0.0001. () Area of lymphatic vessels expressed as percentage of vessels less than or greater than 500 μm2 ( = 4–5, 40 vessels were counted per condition). * < 0.0017. () Representative panel showing the endothelial cell (EC) populations defined as CD45– and CD31+. The LYVE-1 marker allows us to differentiate the lymphatic ECs (LECs) that represent only 3.2%, while blood ECs (BECs) represent 96.7% in healthy heart. () Expression of known lymphatic markers in isolated cardiac LECs compared with BECs in normal heart. Nine or 10 hearts were pooled together to sort ECs; data represent mean ± SD, = 3. () Gene expression in cardiac-isolated LECs from sham mice or 6 weeks after MI. Note the expression of prolymphangiogenic receptor CXCR4 and the expression of inflammatory mediators such as CCL21 and D6. Nine or 10 hearts were pooled together to sort ECs; data represent mean ± SD, = 4. * < 0.001, ** < 0.0005. Statistical analysis was done with Student’s test ( and ) or 1-way ANOVA with Bonferroni post-hoc test ( and ). Scale bars: 50 μm ( and ).