Podoplanin is a negative regulator of Th17 inflammation

Podoplanin is a negative regulator of Th17 inflammation

Recent data indicate that there are different subpopulations of Th17 cells that can express a regulatory as opposed to an inflammatory gene signature. The transmembrane glycoprotein PDPN is critical in the development of multiple organs including the lymphatic system and has been described on T cells in mouse models of autoimmune Th17 inflammation. Here, we demonstrate that unlike in mice, PDPN+ T cells induced under classic Th17-polarizing conditions express transcription factors associated with Th17 cells but do not produce IL-17. Moreover, these cells express a transcriptional profile enriched for immunosuppressive and regulatory pathways and express a distinct cytokine profile compared with potentially pathogenic PDPN– Th17 cells. Ligation of PDPN by its ligand CLEC-2 ameliorates the Th17 inflammatory response. IL-17 secretion is restored with shRNA gene silencing of PDPN. Furthermore, PDPN expression is reduced via an Sgk1-mediated pathway under proinflammatory, high sodium chloride conditions. Finally, CD3+PDPN+ T cells are devoid of IL-17 in skin biopsies from patients with candidiasis, a prototypical Th17-driven skin disease. Thus, our data support the hypothesis that PDPN may serve as a marker of a nonpathogenic Th17 cell subset and may also functionally regulate pathogenic Th17 inflammation. 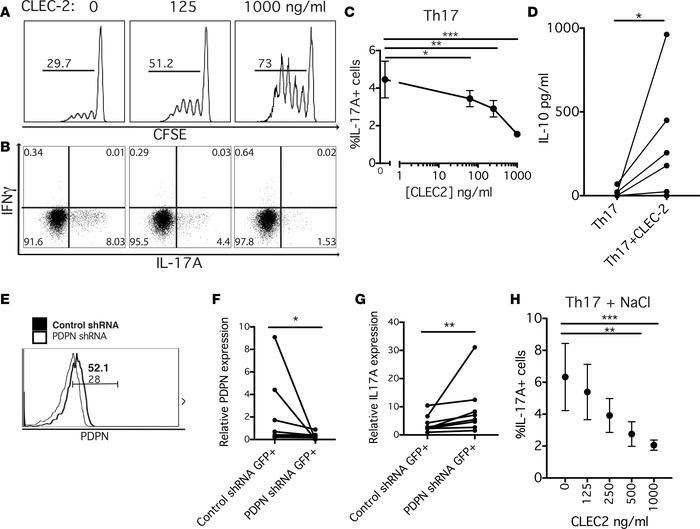