Decreased noradrenergic excitation of hypoglossal motoneurons during sleep causing hypotonia of pharyngeal dilator muscles is a major contributor to the pathogenesis of obstructive sleep apnea (OSA), a widespread disease for which treatment options are limited. Previous OSA drug candidates targeting various excitatory/inhibitory receptors on hypoglossal motoneurons have proved unviable in reactivating these neurons, particularly during rapid-eye-movement (REM) sleep. To identify a viable drug target, we show that the repurposed α2-adrenergic antagonist yohimbine potently reversed the depressant effect of REM sleep on baseline hypoglossal motoneuron activity (a first-line motor defense against OSA) in rats. Remarkably, yohimbine also restored the obstructive apnea–induced long-term facilitation of hypoglossal motoneuron activity (hLTF), a much-neglected form of noradrenergic-dependent neuroplasticity that could provide a second-line motor defense against OSA but was also depressed during REM sleep. Corroborating immunohistologic, optogenetic, and pharmacologic evidence confirmed that yohimbine’s beneficial effects on baseline hypoglossal motoneuron activity and hLTF were mediated mainly through activation of pontine A7 and A5 noradrenergic neurons. Our results suggest a 2-tier (impaired first- and second-line motor defense) mechanism of noradrenergic-dependent pathogenesis of OSA and a promising pharmacotherapy for rescuing both these intrinsic defenses against OSA through disinhibition of A7 and A5 neurons by α2-adrenergic blockade.

Stylized illustration of the roles of baseline HM activity and hLTF as first- and second-line motor defenses against OSA. 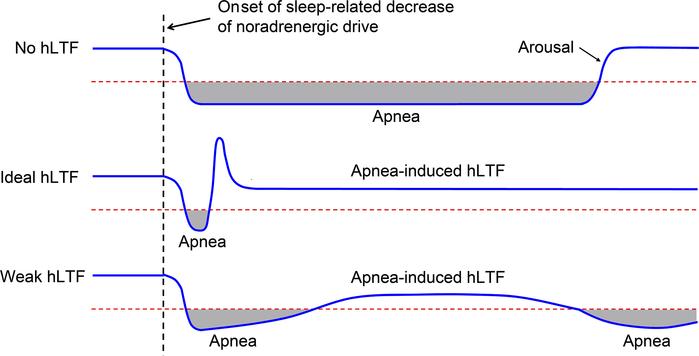 Top: In the worst-case scenario where hLTF (hypoglossal long-term facilitation) is lacking, sustained decline of baseline HM activity (hypoglossal nerve activity, tracing in blue) secondary to decreased noradrenergic drive during sleep would result in protracted unremitting obstructive apnea (interval shaded in gray) until arousal. Horizontal dotted line (in red) denotes the hypothetical threshold of HM activity, below which obstructive apnea occurs. Middle: In the best-case scenario where hLTF is in full force, any lapse of baseline HM activity during sleep would be promptly reversed (<10 sec) by reflexive facilitation of HM activity and further apnea prevented by the ensuing hLTF memory, which (ideally) may be long-lasting after even a brief airway obstruction episode. Lower: In a real-life scenario where hLTF is in effect but significantly depressed secondary to decreased noradrenergic drive during sleep, a corresponding decline of baseline HM activity would be reversed much more slowly (>10 sec) due to weakened and delayed reflexive facilitation of HM activity in response to obstructive apnea. Additionally, the reversal (if at all prior to arousal) would be relatively short-lived (<12 min) due to a much shortened hLTF memory following each apnea episode, hence allowing full-blown obstructive apnea to occur and recur. In patients with severe OSA, the weakened hLTF in sleep is manifested as a short-term potentiation of genioglossus activity during an obstructive apnea episode with an “afterdischarge” afterward ().