Heterozygous germline gain-of-function mutations of G-protein subunit α11 (Gα11), a signaling partner for the calcium-sensing receptor (CaSR), result in autosomal dominant hypocalcemia type 2 (ADH2). ADH2 may cause symptomatic hypocalcemia with low circulating parathyroid hormone (PTH) concentrations. Effective therapies for ADH2 are currently not available, and a mouse model for ADH2 would help in assessment of potential therapies. We hypothesized that a previously reported dark skin mouse mutant () — which has a germline hypermorphic Gα11 mutation, Ile62Val — may be a model for ADH2 and allow evaluation of calcilytics, which are CaSR negative allosteric modulators, as a targeted therapy for this disorder. Mutant and mice were shown to have hypocalcemia and reduced plasma PTH concentrations, similar to ADH2 patients. In vitro studies showed the mutant Val62 Gα11 to upregulate CaSR-mediated intracellular calcium and MAPK signaling, consistent with a gain of function. Treatment with NPS-2143, a calcilytic compound, normalized these signaling responses. In vivo, NPS-2143 induced a rapid and marked rise in plasma PTH and calcium concentrations in and mice, which became normocalcemic. Thus, these studies have established mice, which harbor a germline gain-of-function Gα11 mutation, as a model for ADH2 and have demonstrated calcilytics as a potential targeted therapy. 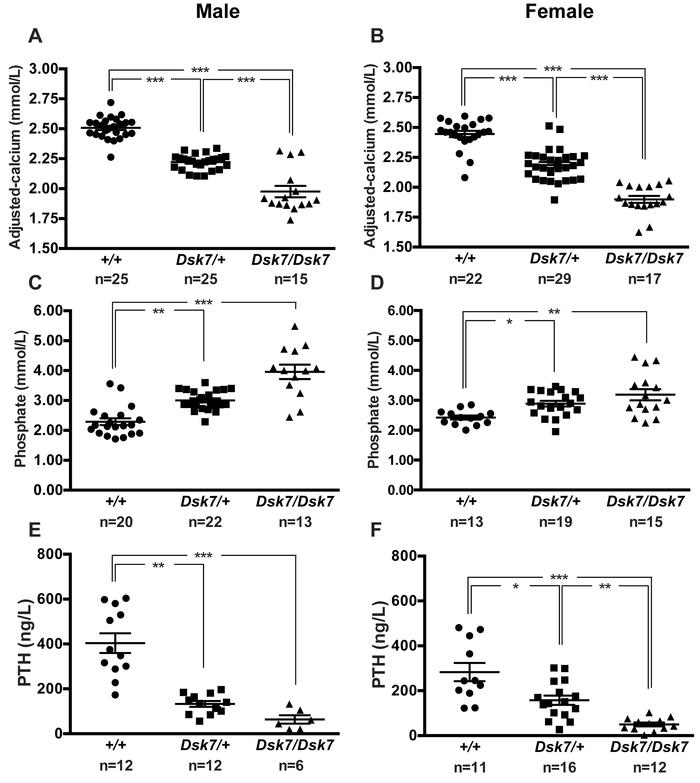 ( and ) Plasma adjusted-calcium, ( and ) plasma phosphate, and ( and ) plasma PTH concentrations of male and female WT (+/+, circles), (squares), and (triangles) mice, respectively. Mean ± SEM values for the respective groups are indicated by the solid bars. * < 0.05, ** < 0·01, *** < 0.001. A Kruskal-Wallis test followed by Dunn’s test for nonparametric pairwise multiple comparisons were used for analysis of –.