There is tremendous excitement for the potential of epigenetic therapies in cancer, but the ability to predict and monitor response to these drugs remains elusive. This is in part due to the inability to differentiate the direct cytotoxic and the immunomodulatory effects of these drugs. The DNA-hypomethylating agent 5-azacitidine (AZA) has shown these distinct effects in colon cancer and appears to be linked to the derepression of repeat RNAs. LINE and HERV are two of the largest classes of repeats in the genome, and despite many commonalities, we found that there is heterogeneity in behavior among repeat subtypes. Specifically, the LINE-1 and HERV-H subtypes detected by RNA sequencing and RNA in situ hybridization in colon cancers had distinct expression patterns, which suggested that these repeats are correlated to transcriptional programs marking different biological states. We found that low LINE-1 expression correlates with global DNA hypermethylation, wild-type status, and responsiveness to AZA. HERV-H repeats were not concordant with LINE-1 expression but were found to be linked with differences in FOXP3+ Treg tumor infiltrates. Together, distinct repeat RNA expression patterns define new molecular classifications of colon cancer and provide biomarkers that better distinguish cytotoxic from immunomodulatory effects by epigenetic drugs. 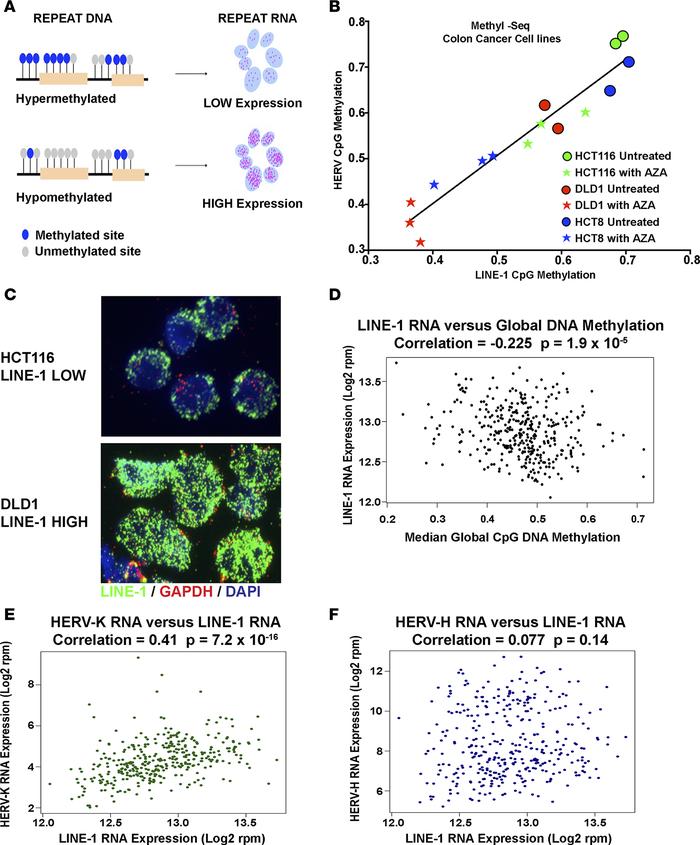