Focal therapies play an important role in the treatment of cancers where palliation is desired, local control is needed, or surgical resection is not feasible. Pairing immunotherapy with such focal treatments is particularly attractive; however, there is emerging evidence that focal therapy can have a positive or negative impact on the efficacy of immunotherapy. Thermal ablation is an appealing modality to pair with such protocols, as tumors can be rapidly debulked (cell death occurring within minutes to hours), tumor antigens can be released locally, and treatment can be conducted and repeated without the concerns of radiation-based therapies. In a syngeneic model of epithelial cancer, we found that 7 days of immunotherapy (TLR9 agonist and checkpoint blockade), prior to thermal ablation, reduced macrophages and myeloid-derived suppressor cells and enhanced IFN-γ–producing CD8+ T cells, the M1 macrophage fraction, and PD-L1 expression on CD45+ cells. Continued treatment with immunotherapy alone or with immunotherapy combined with ablation (primed ablation) then resulted in a complete response in 80% of treated mice at day 90, and primed ablation expanded CD8+ T cells as compared with all control groups. When the tumor burden was increased by implantation of 3 orthotopic tumors, successive primed ablation of 2 discrete lesions resulted in survival of 60% of treated mice as compared with 25% of mice treated with immunotherapy alone. Alternatively, when immunotherapy was begun immediately after thermal ablation, the abscopal effect was diminished and none of the mice within the cohort exhibited a complete response. In summary, we found that immunotherapy begun before ablation can be curative and can enhance efficacy in the presence of a high tumor burden. Two mechanisms have potential to impact the efficacy of immunotherapy when begun immediately after thermal ablation: mechanical changes in the tumor microenvironment and inflammatory-mediated changes in immune phenotype.

Priming the immune system is required for efficacious incorporation of thermal ablation into an immunotherapeutic protocol. 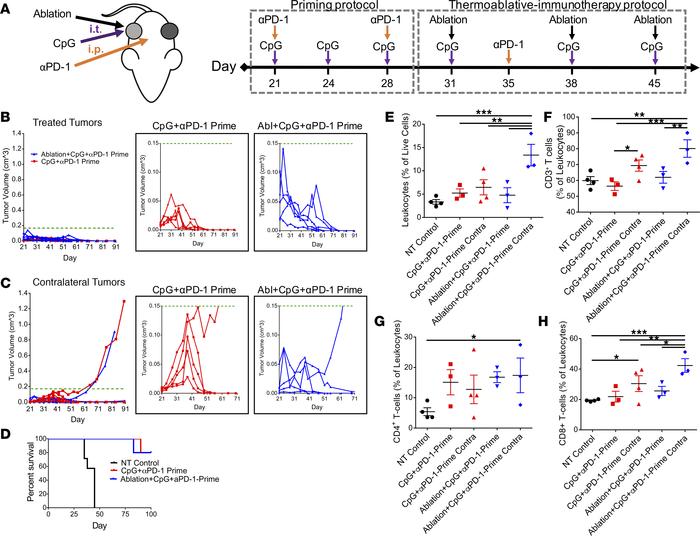 () Regimen of primed thermoablative immunotherapy (TA-immunotherapy). Immunotherapy was administered prior to thermal ablation in priming protocol. Following priming, mice received a combination of thermal dosing and immunotherapy in TA-immunotherapy protocol. Treatments included CpG + αPD-1-Prime ( = 5), ablation + CpG + αPD-1-Prime (Abl + CpG + αPD-1-Prime, = 5), and NT control ( = 4). CpG was injected intratumorally (i.t., 100 μg), and αPD-1 was injected i.p. (200 μg). Tumor growth data result from survival study ( = 14), but trends are representative of 4 separate experiments with varied end points (total = 50). ( and ) CpG + αPD-1-Prime and ablation + CpG + αPD-1-Prime achieved an 80% complete response by day 90 ( = 5). () 100% of all treated tumors and () 80% (4 of 5) of all contralateral tumors from both groups were eradicated after treatment; enhanced views (tumor volume plotted below dotted green line) of the treated () and contralateral () tumor growth from both treatment groups. () Survival outcomes for mice treated with the priming protocol (CpG + αPD-1-Prime, ablation + CpG + αPD-1-Prime, and NT Control, = 4 per group). (–) On day 35, tumors were harvested, and leukocytes and T cells were quantified via flow cytometry (data are plotted as mean ± SEM, = 4 per group). Effect of therapy on () CD45+ leukocytes, () CD3+ T cells, () CD4+ T cells, and () CD8+ T cells. Significance was determined via 1-way ANOVA followed by a Fisher’s LSD test without multiple comparisons correction. * < 0.05, ** < 0.01, *** < 0.001.