Noonan syndrome (NS) is a common autosomal dominant disorder that presents with short stature, craniofacial dysmorphism, and cardiac abnormalities. Activating mutations in the gene encoding for the Src homology 2 (SH2) domain-containing protein tyrosine phosphatase-2 (SHP2) causes approximately 50% of NS cases. In contrast, NS with multiple lentigines (NSML) is caused by mutations that inactivate SHP2, but it exhibits some overlapping abnormalities with NS. Protein zero-related (PZR) is a SHP2-binding protein that is hyper-tyrosyl phosphorylated in the hearts of mice from NS and NSML, suggesting that PZR and the tyrosine kinase that catalyzes its phosphorylation represent common targets for these diseases. We show that the tyrosine kinase inhibitor, dasatinib, at doses orders of magnitude lower than that used for its anticancer activities inhibited PZR tyrosyl phosphorylation in the hearts of NS mice. Low-dose dasatinib treatment of NS mice markedly improved cardiomyocyte contractility and functionality. Remarkably, a low dose of dasatinib reversed the expression levels of molecular markers of cardiomyopathy and reduced cardiac fibrosis in NS and NSML mice. These results suggest that PZR/SHP2 signaling is a common target of both NS and NSML and that low-dose dasatinib may represent a unifying therapy for the treatment of -related cardiomyopathies. 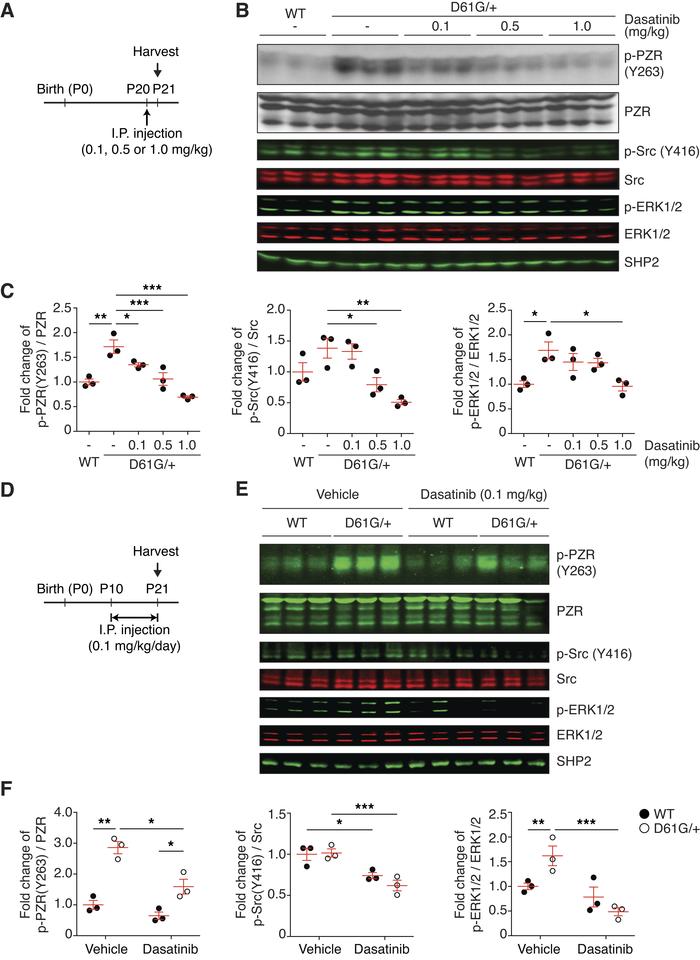