Adaptive changes in the genome of a locally predominant clinical isolate of the multidrug-resistant ST258 (KP35) were identified and help to explain the selection of this strain as a successful pulmonary pathogen. The acquisition of 4 new ortholog groups, including an arginine transporter, enabled KP35 to outcompete related ST258 strains lacking these genes. KP35 infection elicited a monocytic response, dominated by Ly6Chi monocytic myeloid-derived suppressor cells that lacked phagocytic capabilities, expressed IL-10, arginase, and antiinflammatory surface markers. In comparison with other . strains, KP35 induced global changes in the phagocytic response identified with proteomics, including evasion of Ca2+ and calpain activation necessary for phagocytic killing, confirmed in functional studies with neutrophils. This comprehensive analysis of an ST258 . isolate reveals ongoing genetic adaptation to host microenvironments and innate immune clearance mechanisms that complements its repertoire of antimicrobial resistance genes and facilitates persistence in the lung. 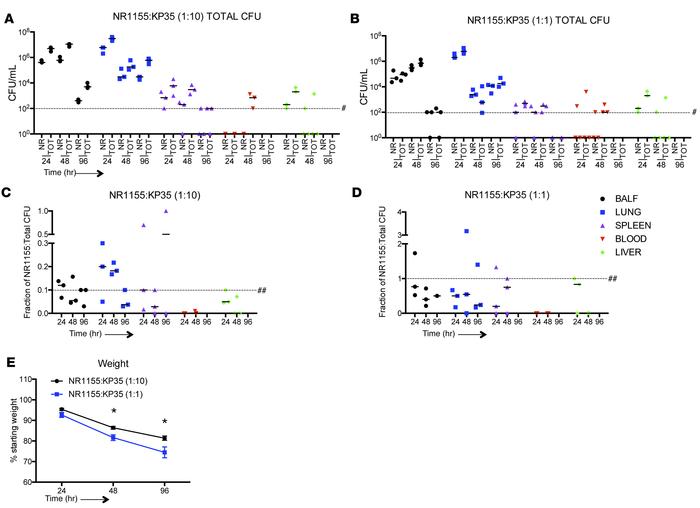 ( and ) A competitive index experiment was performed with NR1155, a closely related isolate to KP35, missing the 4 KP35 special ortholog groups including but harboring the tetracycline resistance genes and . Mice were inoculated intranasally with 108 CFU at a 1:10 ratio of NR1155/KP35 or 107 CFU at a 1:1 ratio and bacterial CFU were quantified. ( and ) Ratio of the tetracycline-resistant isolate NR1155 to the total quantified bacterial load was determined by serial dilution. ## = baseline inoculum. Total CFU recovered from different tissues. NR, NR1155 grown on tetracycline-impregnated LB plates; TOT, total CFU enumerated on LB-alone plates. # = the lower limit of detection. Each data point represents a mouse and the horizontal line is the median. The median proportion of NR1155 in the total inoculum measured at each time point was significantly lower than the baseline (or initial proportion) in all tissues analyzed for both inoculum ratios. < 0.01, using chi-squared test for trend. () Weight loss of the mice over the course of a 4-day infection. * < 0.05, 2-way ANOVA with Bonferroni’s correction for multiple comparisons