Estrogens regulate glycosylation of IgG in women and men

Estrogens regulate glycosylation of IgG in women and men

The immunologic potency of IgG is modulated by glycosylation, but mechanisms regulating this process are undefined. A role for sex hormones is suggested by differences in IgG glycans between women and men, most prominently with respect to galactose. We therefore assessed IgG galactosylation in 713 healthy adults from 2 cohorts as well as in 159 subjects from 4 randomized controlled studies of endocrine manipulation: postmenopausal women receiving conjugated estrogens, raloxifene, or placebo; premenopausal women deprived of gonadal hormones with leuprolide and treated with estradiol or placebo; men deprived of gonadal hormones with goserelin and given testosterone or placebo; and men deprived of gonadal hormones with goserelin and given testosterone or placebo together with anastrozole to block conversion of testosterone to estradiol. Menopause was associated with an increase in agalactosylated IgG glycans, particularly in the most abundant fucosylated nonbisected (G0F) glycoform. Conjugated estrogens and raloxifene reduced G0F glycans in postmenopausal women, while in premenopausal women leuprolide increased G0F glycans in a manner reversed by estradiol. Among men, goserelin increased G0F glycans, an effect blocked by testosterone through conversion to estradiol. These results establish estrogens as an in vivo modulator of IgG galactosylation in both women and men, defining a pathway by which sex modulates immunity. 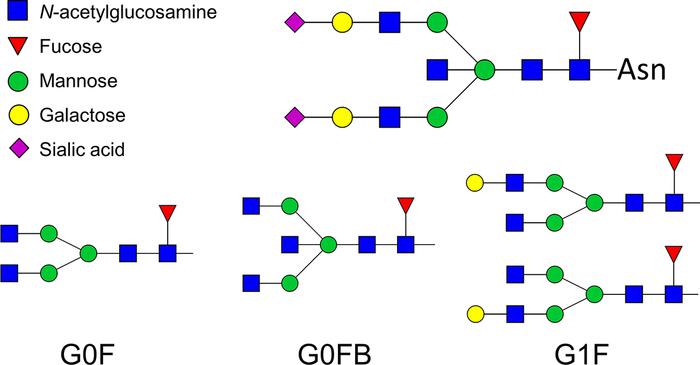